Salvator Mundi, the last known privately-owned painting by Leonardo da Vinci, is expected to fetch $100million (€84.4million) when it goes to auction at Christie's in New York on November 15. Video: Reuters 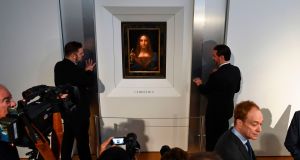 Security personnel stand next to Leonardo da Vinci’s ‘Salvator Mundi’ after it was unveiled at Christie’s in New York on October 10th. Photograph: Jewel Samad/AFP/Getty Images

Salvator Mundi, a painting by Leonardo da Vinci, is to be auctioned at Christie’s, New York, on November 15th, and the estimate is in the region of $100 million.

The auction house described the painting as one of fewer than 20 known paintings by Leonardo, and the only one in private hands. It was long presumed lost or destroyed but was rediscovered in 2005.

Who owns it now?

Christie’s has not named the vendor but it is understood that Salvator Mundi is currently owned by the Russian billionaire Dmitry Rybolovlev.

He’s an art collector who reputedly bought the painting from a Swiss dealer in 2013 for $127.5 million. Rybolovlev, aged 50, one of the richest men in the world, lives in Monte Carlo and owns – among innumerable other assets – the AS Monaco football club, one of the top soccer teams in France.

According to the New York Times: “Salvator Mundi was among 38 artworks by famous artists bought privately for about $2 billion by Mr Rybolovlev through the Swiss businessman Yves Bouvier.

These transactions have become the subject of a protracted lawsuit in Monaco and other jurisdictions. The Russian collector maintains that he was fraudulently overcharged, an accusation Mr Bouvier denies.”

Tell us about the painting? Salvator Mundi (a Latin phrase meaning “Saviour of the World”) depicts a half-length figure of Jesus Christ facing frontally and dressed in flowing robes of lapis and crimson. He holds a crystal orb in His left hand as He raises His right hand in benediction. The image, measuring approximately 15 by 17 inches, is painted on a walnut panel and dates from around 1500.

How rare is a painting by da Vinci at auction?

According to Alan Wintermute, senior specialist in old masters at Christie’s: “Salvator Mundi is the Holy Grail of Old Master paintings. To see a fully-finished late masterpiece by Leonardo – made at the peak of his genius – appear for sale in 2017 is as close as I’ve ever come to an art-world miracle.

“It has been more than a century since the last such painting turned up and this opportunity will not come again in our lifetime. I can hardly convey how exciting it is for those of us directly involved in its sale. The word ‘masterpiece’ barely begins to convey the rarity, importance and sublime beauty of Leonardo’s painting.’’

This is the first discovery of a painting by Leonardo da Vinci in a century – since, in fact, 1909, when the Benois Madonna, now in the Hermitage, St Petersburg, came to light. Mr Wintermute said: “I think it’s pretty safe to say there is no other great painting by Leonardo that is ever going to be sold. It’s incredibly exciting. We’ll never see anything like it again.”

Who was Leonardo da Vinci?

Leonardo da Vinci – also known, simply, as Leonardo – is regarded as the greatest painter in history. Italian (of course), he was born in what was then the Republic of Florence in 1452, worked mainly in Milan, Rome and Florence and died in France, aged 67, in 1519. Apart from art, he was the ultimate genius, the quintessential “Renaissance Man” who also excelled in science, engineering, anatomy and other disciplines.

He is best known for the Mona Lisa (also known as La Gioconda) – the most famous painting in the world – which hangs in the Louvre Museum in Paris. Apart from Salvator Mundi all his other paintings are in museums. Among the most famous are The Last Supper – painted on the wall of a convent in Milan and The Virgin of the Rocks in the National Gallery, London.

His drawings and sketchbooks are also found in major museums, although one, the so-called Codex Leicester – a collection of Leonardo’s scientific writings (named thus because it was once owned by the Earl of Leicester) – is owned by Microsoft founder Bill Gates, who bought it at a 1994 Christie’s auction in New York for $30 million.

Where has ‘Salvator Mundi’ been all this time?

It was painted, probably in around 1500 and its history since then reads like a thriller. What is known, for certain, is that it once belonged to Britain’s King Charles I (1600-1649) because it was recorded in the inventory of the royal collection drawn up a year after his execution.

The painting then mysteriously disappeared, its association with Leonardo was forgotten and it was partially re-painted. In the early 20th century it was acquired by an English aristocrat, Francis Cook, 1st Viscount of Monserrate, and believed to be a work by Leonardo’s follower, Bernardino Luini. The painting was consigned to auction at Sotheby’s in London in 1958, when it fetched £45.

Then it disappeared again for nearly 50 years, emerging only in 2005 when it was purchased in a provincial American auction for $10,000 from an American estate. The unnamed buyer evidently had a hunch and began to research the painting. After six years of painstaking research and inquiry it was authenticated by the world’s leading authorities on the works and career of da Vinci and in 2011, unveiled to the public in the exhibition Leonardo da Vinci: Painter at the Court of Milan at the National Gallery, London.

When and where is the auction?

Salvator Mundi will go under the hammer at Christie’s “Evening Sale of Post-War and Contemporary Art” in Rockefeller Plaza, New York, on November 15th. It is currently on a world tour for viewing by prospective bidders in Hong Kong, San Francisco, London and New York.

Christie’s said “despite being created approximately 500 years ago, the work of Leonardo is just as influential to the art that is being created today as it was in the 15th and 16th centuries. We felt that offering this painting within the context of our Post-War and Contemporary Evening Sale is a testament to the enduring relevance of this picture.”