‘Captain Cook’, one of greatest finds in Irish auction history 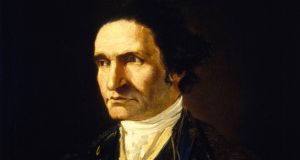 The portrait of Capt James Cook, which may have been painted in England before Cook departed on his last voyage in July 1776 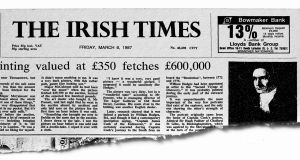 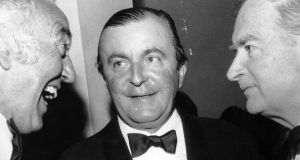 It’s 30 years since one of greatest discoveries in the history of Irish auctions. In early 1987, a London art dealer sold a painting for more than £600,000 that he’d bought a few months earlier at a country house auction in Ireland for IR£27,000. The painting had a pre-auction top estimate of just IR£450. Despite his coup, he might have done even better were it not for the fact that he wasn’t the only bidder. He might, indeed, have secured the painting for just a few hundred pounds but he hadn’t been the only one with a hunch.

Another bidder had also spotted the painting. In auction jargon they had spotted a “sleeper” – an artwork that has escaped the attention of valuers and auctioneers and been assigned an estimate far below its value. So an unexpected bidding war ensued. At the end of the auction, even though the painting had sold for 60 times its estimate, the price was still a huge bargain as subsequent events proved.

But back to the beginning. On September 24th, 1986, Sotheby’s held an auction on the premises of Mount Juliet – an Anglo-Irish “Big House” (now a luxury hotel) near Thomastown, Co Kilkenny. The owner, Maj Dermot McCalmont, was selling up. The house – originally built by the 1st Earl of Carrick for his wife, Juliet – had been acquired by the McCalmont early in the 20th century.

Paintings, furniture, porcelain and silver all went under the hammer and the auction realised IR£590,000 – a huge sum at the time. But what captured the attention of the media the following day was the price paid for a painting – an 18th-century head-and-shoulders portrait of Capt James Cook – that had made a hammer price of IR£27,000. Its top estimate had been only IR£450.

Maj McCalmont was reported to have been “over the moon” at the outcome. It emerged that the buyer, described as anonymous, believed that the portrait was, in fact, an extremely important, previously unknown portrait of Capt Cook by William Hodges.

The story took an even more dramatic twist when, six months later, a front page story in The Irish Times on March 6th, 1987, by Gabrielle Williams and Willy Clingan, revealed that the buyer had been the well-known London art dealer David Posnett and that he had resold the painting to Britain’s National Maritime Museum in Greenwich for £600,000.

And how did Maj McCalmont react to the news? With, of course, the sangfroid that one would expect from a military man. He told the paper: “It’s just one of those things. I’m very disappointed that the money is not in my pocket. But it’s no good crying over spilt milk.” Well done, Major. As a former Buckingham Palace lady-in-waiting put it: “Crying is for housemaids.” Maj McCalmont clearly hadn’t thought much of the painting, describing it as “a picture that I had no liking for myself. It didn’t mean anything to me. It was a very dark picture, with this rather pale, gaunt face looking out.”

But how did experts from the auctioneers not notice that it was special, given that, according to Maj McCalmont, “before the auction, Sotheby’s had done a lot of research on the painting – including bringing details and pictures of it to the National Gallery in London”. The only explanation seems to be that it simply never occurred to anyone that such an important painting could have ended up in such an unlikely location. After all, there was no apparent Mount Juliet – or even Irish connection to Capt Cook.

Mr Posnett, on the other hand, claimed to have spotted that the painting was special the moment he saw it. His attendance at the auction, and his purchase, was a mixture of good luck and a good eye. According to The Irish Times report, he attended the auction by chance. He said he had come over to Ireland on other business and only drove down to Mount Juliet the morning of the auction. He saw the painting for the first time an hour before it went under the hammer and said he “did a double-take”. He said it was very dirty but he “wiped it over with a cloth” and “knew it was a very, very good picture – a wonderful picture”.

So why was the painting so important – and so valuable?

The painting turned out to be an extremely rare – and presumed lost – Portrait of Captain Cook – the most famous English explorer of the 18th century who discovered Australia when he landed at what he named Botany Bay in 1770. Hodges was an official royal navy artist who had accompanied Cook on various voyages. Only three oil paintings by Hodges are known to have survived – and this is one. The painting is a head-and-shoulders portrait of Capt Cook in his naval uniform.

How did it end up, unknown and languishing in an Irish country house?

The painting’s existence was completely unknown until it was discovered in the Mount Juliet auction. According to Britain’s National Maritime Museum, the painting’s first owner was “probably Admiral Sir Hugh Palliser (who died in 1796), Cook’s friend and patron”, who lived in an estate in Buckinghamshire known as The Vache, where he also erected a well-known monument to Cook. But the museum said the painting was “completely unrecorded until 1986, when sold in Ireland by the McCalmont family who had purchased The Vache some time before 1902 and are presumed to have acquired it among the contents”.

Where is the painting now?

The oil-on-canvas Portrait of Captain Cook, measuring 30 x 25 inches, by William Hodges dating from 1775-1776, hangs in Britain’s National Maritime Museum in Greenwich – about 20 minutes by rail or Thames riverboat from central London. The museum also has other paintings by Hodges of the extraordinary sights encountered by Capt Cook and his crew on voyages of discovery in the South Pacific in the late 18th century including the first depictions of locations including Australia, Tahiti and Easter Island.

What happened to Maj McCalmont and Mount Juliet?

McCalmont, an Irishman who served in the British army during the second World War, was a well-known racehorse owner and breeder. The McCalmont family had first leased the Mount Juliet estate in 1902 and then bought it in 1912 when the cash-strapped Earl of Carrick lost a fortune in a stock market crash. Following the sale of the contents, Mount Juliet and its renowned Ballylinch stud farm were sold to Dublin businessman Tim Mahony, the importer of Toyota cars. McCalmont moved to Co Wicklow where he died in 1993.

Mount Juliet then became a country house hotel and golf resort which, in 2014, was sold by the Mahony group for €15 million to businessman Emmet O’Neill and Brehon Capital Partners. The 840-acre Ballylinch Stud was sold separately, for an unknown sum, to US billionaire John Malone, chairman of cable television and communications company Liberty Media, who is reputedly America’s biggest landowner and has acquired numerous properties in Ireland in recent years.

And the art dealer David Posnett?

David Posnett was a stockbroker in London who, in 1966, changed career and joined Leger Galleries in London to become an art dealer. Within a decade, he had become an acknowledged expert in the field of Old Masters. In 1996, Posnett sold the company to coin and medal dealer Spink and Son. He retired to live in the south of England and, in 2012, was awarded an OBE (Order of the British Empire) by Queen Elizabeth for his services to museums.