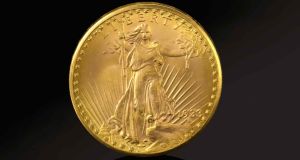 On June 8th this year, the eagle eyes of philatelists and numismatics around the globe will most certainly be on Sotheby’s Three Treasures – Collected by Stuart Weitzman sale in New York.

Though stamp collecting has seen a decline since the world became digitised, in 2013 The Wall Street Journal estimated that there are still about 60 million stamp collectors in the world.

Interestingly enough, the first ever collector is said to be Irish man John Bourke, who as Receiver General of Stamp Dues in Ireland, assembled a book of stamps in 1774, which is preserved in the Royal Irish Academy in Dublin.

American designer Stuart Weitzman, made his fortune from shoes, and created the third most expensive pair of shoes in the world, fashioned from a pair of earrings that belonged to actress Rita Hayworth. Worth a cool $3m, they are now in the closet of Hayworth’s daughter, Princess Yasmin Aga Khan.

The elusive 1933 Double Edge Eagle Coin, which set a record when Weitzman purchased it in 2002 for $7.9m (€6.65m), is the only coin of its kind sanctioned for private ownership. The 20-dollar piece, which has been at the centre of numismatic intrigue for more than 70 years, was the last American gold coin struck, but was never legally issued for use, as president Franklin Roosevelt took the United States off the gold standard in an effort to repair the tattered economy from the Great Depression.

Although almost half a million were minted, all but two were ordered to be melted down, one of which is the Weitzman coin, and the second is in the United States National Numismatic Collection.

As with any treasure, the story is never that simple and the Weitzman coin was at the centre of a diplomatic incident with King Farouk of Egypt before he was deposed in a coup d’état in 1952.

A voracious collector, Farouk – who had more than 8,500 rare coins in his royal coffers – acquired the coin, which he refused to return to the US despite diplomatic requests. It disappeared until 1996 when dealer Stephen Fenton was arrested by the US Secret Service during a sting operation.

Further intrigue surrounds the sole-surviving British Guiana One-Cent Magenta, an unassuming penny issue from 1856, which Sotheby’s says “has been heralded as the pinnacle of stamp collecting for more than a century”.

Each of the four times it has been sold at auction, it has established a new record price for a single stamp, last selling to Weitzman in 2014, for $9.8m (€8.25m) – almost a billion times its original face value.

The 1c stamp was intended for use on local newspapers in British Guiana (now Guyana) and this stamp came about through mischance. Due to a delivery of stamps not arriving, the local postmaster authorised a printing company – who were publishers of the Official Gazette newspaper in Georgetown – to print an emergency issue of three stamps.

The printer decided to add a ship to the design, which infuriated the postmaster, so he ordered that the stamps be autographed by a clerk. Now the signature of Edmond D Wight is forever enshrined in the annals of philatelic history.

The only copy known to exist, Weitzman’s stamp, was discovered in 1873 by 12-year old Scottish schoolboy, Louis Vernon in the Demerara district of Guyana – the postmark of which it bears.

As there was no record of the stamp in his catalogue he sold it for six shillings to a local collector. From there, it was sold on and eventually the stamp was willed to a museum in Berlin, subsequently ending up in France as reparations following World War I.

Carrying on the tradition of the signature from a postal clerk in 1856, Weitzman added his initials “SW” to the reverse of the stamp, along with a line drawing of a stiletto shoe as a nod to his legacy in fashion ($10m–$15m/€8.4m–€12.6m).

An error is what makes the 24-Cent Inverted Jenny Plate Block “the most famous and valuable item in United States stamp collecting”.

In the 1910s, the United States Post Office began a number of trials carrying post by air, and to commemorate this, a special stamp featuring a Curtiss Jenny biplane was issued. Except in one print run, the plane was upside down. Tales of this rare stamp involve heists and forgeries, so now the history of all sales are publicly documented ($5m-$7m/€4.2m–€5.8m).

The proceeds of the sale from Weitzman’s three tiny treasures will go to the designer’s charitable ventures.