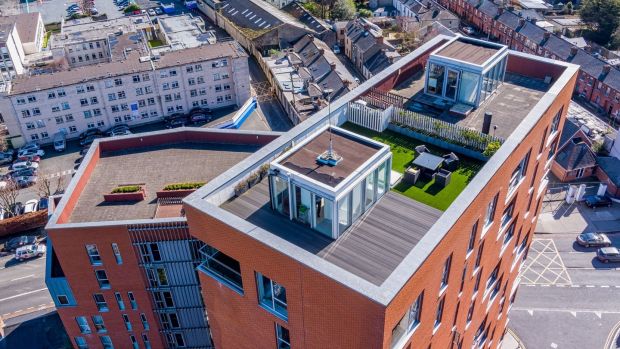 If you love light and space and want to enjoy 360-degree views of Dublin city’s landmarks then check out number 69 Earlscourt, a tri-aspect, three-bedroom duplex with 100sq m (1,076sq ft) of roof terrace, which boasts all of the above.

Set over the 11th and 12th floors of this red-tile clad brutalist-style building, on a prime corner site at the junction of Cork Street and Reuben Street in Rialto, the property was designed by FKL Architects, built by John Paul Construction in 2004, and received a special mention in the 2006 AA1 Awards.

Completely remodelled, the property is now an urbane pad ready for a city slicker to unpack his or her bags and start inviting round friends for socially-distanced drinks atop its impressive terrace. Extending to over 100sq m (1,076sq ft), from here you can see the Guinness buildings, the Dublin Mountains, and across the river to the Wellington Monument in the Phoenix Park and to Dublin Bay and Howth.

When its current owners purchased it in 2017, paying €375,100 for it according to the property price register, it had a Ber rating of F, even though sunlight seeps in on three sides. The installation of a new electric heating system has brought the energy rating up to a decent D2.

The property’s open-plan living room meanwhile has been complemented by the installation of a smart new kitchen and grey flooring. The concrete grey-coloured units, designed by B Space, include a large silestone island-cum-breakfast bar with hob and under-counter extractor that all help to create a sleek look.

From the dining area there is access to a balcony overlooking Cork Street. North-facing, from here you can see the Spire, the Poolbeg towers and the sea, a vista you can enjoy from the main bedroom.

The residence comes with a separate utility room with space for a washer and dryer to sit next to each other leaving plenty of room overhead to install drying racks.

This additional room, which is far from standard in Dublin apartment schemes, means you can enjoy the rest of the living space, about 116sq m (1,250sq ft) in total, in the absence of the clutter caused by clothes horses laden down with bed linen and underwear.

The owner also revamped the bathrooms, three in total, so that these are now walled in metro tiles.

The property has three bedrooms, two en suite doubles and a single that is used as a home office or study.

A set of steps leads up to the terrace, via a sun room, which is glazed on four sides. This spectacular space gives a 360-degree vista of the capital. It features two levels and opens out to an anthracite-coloured composite deck, stepping down to an artificially-grassed level.

This terrace is just one of two at this level and is completely private. At least it was thanks to a hedge of Portuguese laurel that shielded it from the neighbouring terrace. “You could have sunbathed naked there,” the owner says, before conceding that the hedge was neglected during the second lockdown. The owner who is now living on the west coast couldn’t travel to water the laurel and says it will take about a year to return to form. That said, the terrace itself remains ripe for socially-distanced small gatherings.

While those trading down will be delighted to hear that the main body of the property is accessed via a lift, the terrace, one level above, is steps only. The annual service charge is currently just under €3,000 and the property, which is seeking €500,000 though agent Owen Reilly, comes with one car-parking space.