An Irishman’s Diary on Brian Friel and Dev

Deaglán de Bréadún: Brian Friel told me ‘I wanted my political career to be like Dev’s sex life’ 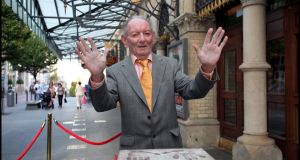 Brian Friel: “In short I am getting a salary that is not earned. And I feel all the more sensitive about this when I see the great work that many of the senators do.’ Photograph: Brenda Fitzsimons

Here’s a good one for your next pub-quiz. Question: There are two O’Connell Bridges in Dublin, one is across the Liffey, where is the other one? Answer: In St Stephen’s Green. In a phrase associated with the actor Michael Caine (although he denies ever using it): “Not many people know that.”

It was on the smaller O’Connell Bridge that I first had a conversation with the distinguished playwright Brian Friel. Ever the inquisitive journalist, this is what I said to him: “Brian, you were a Senator for two years, but you never spoke. I reported on the proceedings from time to time and a contribution from you would have livened-up the place. Why did you never speak?”

The author of Translations and Philadelphia, Here I Come! smiled, put his arm around me in what would now be called a “man-hug” and said: “I wanted my political career to be like De Valera’s sex-life.”

Well, that shut me up and no mistake. I had never heard anyone refer to Éamon de Valera’s sex-life although he fathered seven children and must have known how they were generated.

It was one of Dev’s successors as Fianna Fáil leader and taoiseach, Charles J Haughey, who nominated the Tyrone dramatist to Seanad Éireann after the 1987 general election.

Friel said in an Irish Times interview with Martin Cowley that he was “stunned and honoured” to be chosen as a member of the Upper House of the Oireachtas.

But he stressed that he would not be drawn into the world of party politics or even give speeches on political issues, although he might make an exception if something came up in the cultural area.

Thanks to the efficient and obliging library and research service at Leinster House I have been able to confirm that there is no record to show that he ever said a word.

However, he did vote on three pieces of legislation.

The first was in April 1987 when he supported two unsuccessful attempts to ensure that ratification of the Single European Act would not undermine Ireland’s right to pursue an independent foreign policy and retain its military neutrality.

In April 1988 Friel voted on legislation to reform the laws on adoption. In the same month, he wrote a letter asking Haughey, “with genuine reluctance and regret”, to accept his resignation from the Seanad.

In the letter, a carbon copy of which can be found in the Brian Friel Papers at the National Library, he explains: “I do this only because my own work seems to absorb all of my time and because over the past year I feel – I know – I have failed to give the Senate the attention and consideration it deserves.

“I have no doubt you will find somebody more worthy and much more efficient for the post.”

He concludes by thanking the taoiseach for the “wonderful distinction” of being nominated. There is no reply on file and it is not entirely clear the letter was actually sent, but the resignation did not take place and he stayed on until the calling of the general election in 1989.

Perhaps Haughey did not want the embarrassment that might ensue if one of his nominees failed to stay the course and may have persuaded Friel to stay on for that reason.

As for the quip about De Valera’s sex-life, in his 1993 biography Tim Pat Coogan tells us about an incident during Dev’s last term as taoiseach, where the colourful Donogh 0’Malley missed a vote in the Dáil because he had delayed too long in the bar. Called to account next day, the Limerick TD was told by his angry leader: “They are saying you drink too much.”

Without batting an eyelid, O’Malley urged him not to take that kind of thing too seriously: “Sure they’re saying you had an affair with Kathleen O’Connell in America.”

Clearly taken aback, Dev launched into a long dissertation to prove that himself and his secretary were in different cities during that US tour in 1919-20.

Nevertheless, the foot-soldier clearly bested “The Chief” on that occasion.

1 Coronavirus: 200 new cases reported in largest daily total since May
2 Gardaí investigate after woman pushed into Royal Canal following alleged racial abuse
3 Chairman of Fáilte Ireland resigns after it emerged he is holidaying in Italy
4 Anne Doyle: ‘Depression? I know what it is, and it’s a b*tch’
5 Inside the O’Brien Fine Foods factory in lockdown Kildare
Real news has value SUBSCRIBE