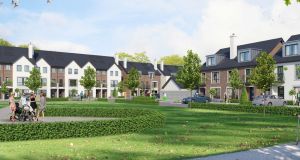 A computer-generated image of the houses at the proposed Sutton Fields scheme.

While the delivery of new housing is temporarily on hold due to the Covid-19 crisis, the flow of planning applications for new home schemes continues.

Kilternan-based David and Paul Butler are the latest developers positioning themselves to take advantage of the ongoing demand for housing on the city’s southside with plans for one of the biggest schemes to date in the foothills of the Dublin foothills.

In an application submitted to An Bord Pleanala (ABP) on April 3rd, the Butlers have sought fast-track planning permission for the development of 116 new homes and a creche facility on lands they own at Ballybetagh Road in Kilternan.

Should it secure approval from ABP, the “ Suttons Fields” scheme would comprise 85 houses and 31 apartments. The proposed housing mix looks to cater for the full range of potential occupiers from first-time buyers to movers and downsizers.

In availing of the Government’s temporary Strategic Housing Development process, the Butlers could reasonably expect to receive a decision on their proposal for the Kilternan lands by October at the latest.

Under the fast-track scheme, developers seeking permission for 100 residential units or more are no longer required to apply to their respective local authorities, but can instead go directly to An Bord Pleanála. With ordinary planning applications for large housing developments to local authorities typically appealed to ABP, ultimate approval can, in certain circumstances, take up to 18 months to secure. The fast-track regulations see determinations reduced to a maximum of six months.

The Butlers’ lands are well-located and within close proximity to a number of popular new housing schemes including Durkan Homes’ hugely-successful Bishops Gate development.

The potential value and appeal of the proposed Sutton Fields scheme would be enhanced further by Dun Laoghaire Rathdown County Council’s planned delivery of new roads at Glenamuck, which would make the site more accessible to the nearby M50 motorway and N11.

‘I’ve been sleeping with my girlfriend’s sister. I need help. What do I do?’
8