Fall in love by the gasworks wall townhouse terrace from €730k

Stories of 2018: Nine new homes built on a strip that once housed a rope factory generated lots interest in downtown Googleland 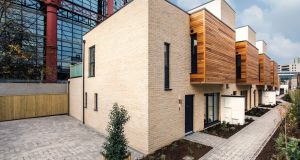 A small development of nine townhouses on South Lotts Road in Ringsend offers buyers in the Dublin 4 area an interesting alternative to the apartment schemes currently on offer.

On a long narrow site, set between the towering Victorian gasometer and the two-storey artisan red-brick dwellings on Gordon Street, there is now a terrace of three four-bed and six three-bed houses. They go on sale this Saturday with prices starting at €730,000 for the three, beds rising to €850,000 for the four beds.

The design shows just what can be done on a challenging site and this one got its unusual dimensions and the name from its use 100 years ago as a rope factory. Long before this area became digi central with gleaming glass office towers housing global tech firms with thousands of young workers from all over the world, it was home to dockers and factories for shipbuilding-related trades. As such, the developers, G2 Construction, hit on the name The Ropery for its mews style development.

The nine houses are in a terrace fringed by a path and they range in size from 96sq m (1,033 sq ft) to 130sq m (1,400 sq ft). All have a slightly different interior layout but the four bedroom versions are three storey - with the large fourth bedroom and en suite located on the top floor. In all styles, there are three bedrooms on the ground floor - two good-sized doubles, one with en suite, with built-in wardrobes, and a large single - as well as the smartly appointed bathroom. Two of the bedrooms open out to a ground floor terrace at the rear - the first of two terraces in each house - each one cleverly screened from its neighbour for privacy.

The living accommodation is on the first floor for reasons that are all to do with the unusual site . It was, says the architect Larry Pierce of Pierce and Associates to make best use of the light – and for the “wow factor” of the view of the gasometer. Bedrooms don’t need so much sunlight, while the living and kitchen areas – where people spend most time – do. So on the first floor is a long living room with floor-to-ceiling glazing and access out via a sliding glazed panel to the second terrace.

It’s up here where you get the best sense of the urban location; that while the square footage and number of bedrooms in the houses in The Ropery are more usually found in suburban new builds, there’s no doubting these are city homes. The view from the sofa in the very smartly designed showhouse is of the gasometer, and beyond that the area’s ever-changing skyline with its tall glass-walled office blocks.

The kitchen, located to the front, is separate from the living area, a rare enough find in a contemporary townhouse. This will increase the desirability of The Ropery for downsizers as well as young families. It is fitted with sleek Athena integrated units in glossy grey, with handle-less doors to carry through the contemporary look and there are Siemens appliances and Silestone quartz worktops. There is space in the kitchen for a small bistro type table while daylight comes from a large roof light and a narrow window. To protect the privacy of the homeowners on Gordon Street whose homes back on to The Ropery, there are no large windows in the front façade.

As well as the fitted wardrobes, storage options include a large walk-in cupboard off the landing and space under the stairs.

Pierce kept the materials simple – brick, render and cedar cladding – and says the creamy white brick - imported from Italy - was chosen for its light reflecting properties.

The A3 rating indicates a build with excellent thermal and sound insulation. The houses also have solar panels, an Aereco demand-controlled ventilation system and other energy efficient features to keep bills down and increase home comfort.

The largest three bed – number 9 – will be of most interest to someone who works from home as it has an additional small room that could be used as a study. At the end of the path that runs along the terrace, it is the most private in the development and with 110sq m (1,1840 sq ft) it is priced at €760,000.

“This was a completely unusual project, squeezed in the middle of the city centre,” says Pierce. “You had to innovate in terms of space.”

Each house having two terraces was, he says, “an urban response” – while there was no room for gardens, people value their own private outdoor space. Pierce notes that the council’s planners were sympathetic to the scheme – something that should encourage other developers spotting unusual sites that at first seem too challenging but whose location outweighs most difficulties.

Each house in The Ropery comes with a parking space and there are bicycle stands, although given its prime location – within walking distance of the city centre and the restaurants and shops that have sprung up nearby, particularly along Bath Avenue and in Grand Canal Dock, a car would be an optional extra for many people. The very smart Lotts & Co deli and wine shop is the nearest shop to the development, a sign how this part of Ringsend has changed beyond imagining in the past 20 years.

There will be a small management fee - as yet undecided - but it should be relatively small given the style of the build and the low maintenance nature of the site with its minimal landscaping.

Owen Reilly is handling the sale of the nine townhouses in The Ropery, with the showhouses open on Saturday for first viewing.

Róisín Ingle: Deck the feckin’ halls. That is an order
9