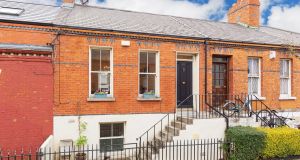 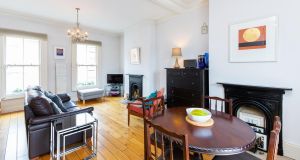 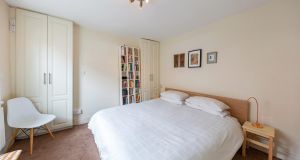 One of the two bedrooms

A two-bed redbrick off South Circular Road with a link to James Joyce’s Ulysses is a villa-style “upside down” house that was given a partial makeover before its current owner bought it in 2015.

Number 28 St Kevin’s Parade – an L-shaped street that runs from Lombard St West to Clanbrassil St, in what was once Dublin’s Jewish quarter – has all the basics: plumbing, electrics and heating (it has a combi boiler). It was modernised says the owner, who has lived there comfortably for three years, but he assumes new owners will want to revamp the house – the downstairs in particular could be upgraded.

Built about 1877, the house is one of four in a terrace, three of which (including number 28) unusually, have side steps up to the front door. A door to the left of the small upstairs front hall opens into a large open-plan L-shaped room, which was probably two rooms originally.

Painted white, it’s a bright space with a high ceiling and simple coving, two black cast-iron fireplaces and a wooden floor. The galley-style kitchen is at the rear, next to a window that looks down to a courtyard below. Two tall sash windows to the front overlook the street.

There’s a bathroom upstairs and downstairs and two small double bedrooms, one is en suite, and both have fitted wardrobes. French windows near the end of the hall open into an enclosed courtyard; behind that, there’s a storage area and a third shower room.

There is residents’ permit parking on St Kevin’s Parade.

The Joyce connection arises in the Cyclops chapter of Ulysses when the narrator parodies legal jargon in a passage that mentions one Moses Herzog, identified later as a real person who lived at St Kevin’s Parade. Confusingly, his address was number 13, but the deeds of the house now for sale describe it as “the premises formerly known as No 13 St Kevin’s Parade and now known as No 28, St Kevin’s Parade . . . ”.