Farewell Portobello: corporate couple selling up for a simpler life

Three-bedroom period house for €1.1m – on the market for first time in 30 years 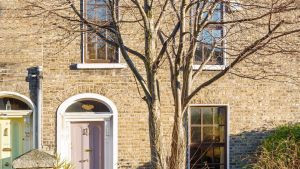 The new year – and decade – has astrologists in a flurry over the alignment of the planets. The rare arrangement of Jupiter, Saturn and Pluto, which occurs only once every 735 years, marks the end of an era and “the birth of a new paradigm with respect to both individual and collective power and resources” according to astrologists.

For the owners of 6 Longwood Avenue, a terraced house in Portobello, this year also marks the advent of new beginnings and a leap into the unknown.

Joan Hart, a former management consultant with Accenture, and husband Paul Farrell, a former urban planner, are taking a leap of faith to follow their passions having thrown the towel in on their corporate worlds.

“This has been home for 30 years and it is time for us to move on. We have had the best of times here and now want to divide our time between Dublin and Cork [where Hart hails from] and do things we really love,” says Hart.

So it’s goodbye to early mornings, pressed shirts and the plethora of emails that lie in wait as the Monday morning preface to a new week, and hello to yoga, healing and the arts.

The couple purchased the house 30 years ago, on advice from a friend who lived on the road. Even then, despite the majority of houses on this quiet avenue off the South Circular Road being in flats, there was a demand for the property: “There were seven of us bidding for the house, but we eventually got it and it has been a very happy home ever since.”

The layout is unusual, in the sense that it is not the normal run of the mill, with two reception rooms set off a hallway connecting to the kitchen to the back.

The middle section of the house is actually split down the centre, which allows for a secondary living room – used as a study – and a dining room, which is warmed by a stove.

This is in addition to a large eat-in kitchen, full-sized wet room and sun room that were a later build to the rear of the property.

Originally the house would have had four bedrooms – in the days of outside loos – but now has three and a generous family bathroom.

If new owners wished, two of the downstairs rooms – eitherthe sunroom or study, both of which open on to the garden – could be used as an extra bedroom. It is all a bit of a moveable feast within 146sq m (1,571sq ft) of living space.

One of the biggest selling points is the rear garden where Hart and Farrell held their wedding reception for 65 guests. At 90ft (27m) long, it is a remarkably quiet spot despite its proximity to the South Circular Road and Grand Canal.

Adjacent to the rear patio, which is overlooked by an ancient apple tree, is a small well that the couple discovered when extending the house in 2003. “It became the focus of our renovation in a sense as it is such a rarity – to have your own well – and it’s great as it allows constant water for the garden.”

Hart and Farrell are off on their new adventures in life and have placed their home, in excellent condition, on the market through Sherry FitzGerald seeking €1.1 million.