Latest instalment of 26 high-end apartments in Lansdowne Place includes a €7m penthouse, while the first residents can now avail of the private amenities

The latest phase of Lansdowne Place in Ballsbridge, Dublin of 26 high-end apartments ranging from 65sq m to 512sq m, by Chartered Land, has come to market. Video: Savills/Sherry Fitzgerald 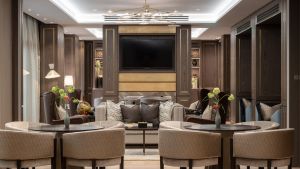 The latest phase of Lansdowne Place in Ballsbridge of 26 high-end apartments ranging from 65sq m to 512sq m, by Chartered Land, has come to market.

The first launch in 2017 offered 110 apartments of which “88 have sold, but do not appear on the Property Price Register as yet. Contracts are signed and closing has started”, says David Browne of Savills who is handling the sale along with joint agent Sherry FitzGerald.

Rising to seven storeys in seven linked blocks the scheme sits on the site of the old Berkeley Court Hotel, famously purchased during the boom by Sean Dunne with dreams to erect a 37-storey tower much to the vexation of local residents.

Two of the penthouses in the last development reportedly sold for €5m and €6.5m. One of which was reported to have been purchased by Stephen Vernon of Green Property, making it the most expensive in the country. The new penthouse is seeking €7m.

What sets Lansdowne Place apart from other high-end schemes are the extensive private amenities on site where Liam Guerin, head of concierge services for the development, will oversee a 24-hour guest service to cater for residents’ every whim.

Residents have access to a fitness suite, wellness centre and treatment rooms. Further amenities include a morning lounge with coffee, pastries and papers, a more formal lounge for meetings, in addition to a meeting room which can also be used as a dining space for larger dinner parties – with a separate kitchen for caterers.

The entire site was originally the Botanic Gardens for Trinity College Dublin – and each block takes its name from renowned Irish botanists.

Landscape architect Bernard Seymour and his team are busy completing the outdoor spaces, which include a private botanic garden and a multitude of private spaces, with water features and bespoke sculptures – most notably Rachel Joynt’s oversized Arbutus Unedo fruit in the main courtyard.

It will be the penthouse which will attract attention at the open viewing on September 7th. And like all penthouses it is the outdoor space that is the all-important feature for buyers.

Off one of the swish living areas lies an enormous granite-paved outdoor dining room, but the piece de resistance is the wraparound rooftop terrace. Besides being private, and receiving all day sun, the views sweep from the mothership Aviva stadium all the way round to the Dublin Mountains.

The space screams out for entertaining and with the large terrace downstairs it could easily cater for 150 people. To that end, there is a separate entrance for catering staff to the penthouse, which can be facilitated through Guerin and his team.

Finishes match the asking prices and include Macassar ebony veneers with antique brass and state of the art Miele appliances. Two interior designers – London-based Goddard and Littlefair and Irish woman Sara Cosgrave – have added signature details.Cosgrave’s approach is less masculine with superb use of mid-century design.

Rory Guthrie of deVeres was tasked with adorning the walls of the development, which now feature some of Ireland’s most prominent artists – such as John Shinnors and Liam Belton – that tie in beautifully with the decor.

Ancillary services, along with the high-end decor and verdant outdoor spaces, are likely to attract buyers – many of whom to date are returning expats. Browne says there are no plans to sell any future blocks in the scheme as private rental sector (PRS) investments.

Annual service charges for the units are in the region of €4.50 per sq ft.

Fixer-upper Gothic castle to call your own for €2.75m
2

Villa oasis by the Forty Foot in Sandycove for €1.95m
7