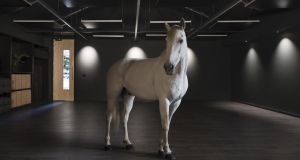 Horses were once stabled at the building, which now houses The Space Between.

A newly opened yoga studio in Dublin 2 has nailed a certain kind of atmosphere that should appeal to those wanting to escape the stresses of modern life.

Simple but transcendental design considerations mean that every aspect of the yoga studio – sound, feel, touch, taste and scent – have been given equal billing.

The ambient attitude at The Space Between, on Dublin’s Fenian Street – which offers hot yoga, meditation, breathwork and movement classes, as well as a tea room that welcomes dogs – starts with the inverted sunrise of the facade. Painted in concentric circles of orange fading to yellow, the design is based on the colour theory of the abstract Josef Alber, explains its owner, Dave Smith, who spotted the former coach house as he was cycling around the city, and persistently contacted the owner, who eventually agreed to meet him.

Smith has form in spotting city spaces. During the recession he set up the now-defunct Mabos, an events space housed in a former bicycle factory on Hanover Quay. It is now AirBnb’s head office in Dublin.

For this venture, he joined forces with designer Jordan Ralph, whose aesthetic diners at Lucky Tortoise on Aungier Street will already know.

Measuring about 450sq metres in size, the single-storey space has a tea room to the front, with a mobile phone repository behind the front desk should you wish to go off-grid for a while and enjoy a variety of brews served up in amber glass cups by Kona and supplied with two and five-minute timers to tell you how long you should let the infusion brew.

A circular mirror of graduating blues and magentas by a Dutch artist hanging on a wall bring in a pop of colour.

Steps and a set of bi-fold Espero doors, supplied by MJ Flood, and panelled in acoustic softening ash, by Newcastle-based joiners Billings & Brew, separate you from the first of the property’s two yoga studios.

This is a bright, vaulted room with its original steel support beams still in situ. It is lit from above by a roof lantern with a secondary light source supplied from the square steel LED strip lighting, supplied by Tramore-based Dlight, that reflects ambient light back up onto its ceiling planes .The strip lighting turns an invigorating kind of blue to activate circadian rhythms for early morning workouts and can drop to a manuka-honey shade for after-dark wind-down sessions.

To the right of the entrance lobby there is a corridor that extends to 24 metres long, broken up by a bench, made of Irish ash, that forms the backbone to the place, Ralph explains. Neat brass Muutto coat hooks above and divided areas below give yogis a place to store their bags, coats and to sit as they undress or dress.

A drinking fountain is set into an arched niche dashed with bun-sized pebbles, that were gathered to order by Smith’s godson and his friends on a shingle beach in his native Glandore. It’s a simple but effective look that compels you to caress it.

Throughout the place is gently warmed by underfloor heating concealed beneath a blue concrete screed floor, supplied by Polished Concrete Ireland.

But the most beguiling part of the whole endeavour is its black heart, the anthracite painted room where hot yoga takes place, which runs the width of the building.

This studio feels far more intimate, the yin to its yang. It has round windows that frame glimpses of a west-facing garden where a mature native hanging ash has pride of place, and where there is a cold outdoor shower to help you cool down after a session. More beach pebbles have been strewn here to create a natural stall base. Back inside there are Therma Ray radiant ceiling panels that use infra red that heats the skin but stops you breathing in hot air, Smith explains.

Throughout the rooms pale ash speakers hang, haunting corners like ghosts. These were custom designed by musician and Choice Music Prize-winner Simon Cullen and fill each room with will well-pitched audio that enriches the experience without ever taking over. It’s all part of a very nuanced package that “helps to ground you, so that you’re better able to respond to life’s stimuli,” Smith explains.

The space, which champions the very best in Irish design has been photographed by Smith’s friend Agata Stoinska, who runs D’Lite Studios in North Strand, and who has a background is architectural photography. Smith decided to bring in a white horse to “complete the circle”, Ralph explains , for horses had always been stabled here.