Formerly a boarding school and seminary, Belcamp features an Oval Room modelled on the White House and a miniature castle in honour of US president George Washington 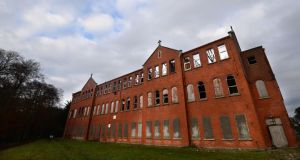 Belcamp College, part of Belcamp House, showing signs of the disrepair into which the property on the Malahide Road, Dublin, has fallen. Photograph: Dara Mac Dónaill

Belcamp House is a late 18th century Georgian County House on an elevated site in north Dublin. It was originally built for Sir Edward Newenham, a member of the Irish parliament and an ardent supporter of the Republican Party in the United States.

Belcamp House became the central block of a boys’ boarding school and seminary, the red brick Belcamp College, run by the Oblate Fathers, in 1893. The school closed due to declining numbers in 2004. Past pupils include golfer Philip Walton, actor Brendan Gleeson and Kilkenny hurling star Frank Cummins.

The entire site – including more than 200 acres of former agricultural land – was bought by developer Gerry Gannon in March, 2004, for €105 million. The river Mayne passes through the grounds and acts as the dividing line between Fingal and Dublin City Council. An abandoned walled garden, stable buildings and a neo-Romanesque redbrick chapel are other significant features.

Belcamp was vandalized on several occasions and was described as an extremely dangerous zone following the closure of the school and the subsequent sale. Planning permission was granted in 2007 for change of use of the school buildings to apartments but was not proceeded with. There were many arson attacks, which culminated in fires to Belcamp House in March, 2011, and an extensive fire to the adjoining college buildings days later.

The Georgian house has some original features including a cantilevered stone staircase, panelled doors and plasterwork – all of which require repair and restoration. The original windows were all smashed and none of the original fireplaces remains in place. A 19th-century chapel adjoining Belcamp House, built by the Oblates, had Harry Clarke windows. These were removed and put into storage for safe keeping.

No repairs have been carried out but following the fires, the entire building complex was entirely bricked up on ground level and all upper openings were filled in with wooden panels to prevent any possible access points. There is 24-hour security on the site.

Belcamp House is on Fingal County Council’s protected structures list since 1972. An Taisce also placed Belcamp on its most endangered buildings list, following the fires. Ian Lumley, of An Taisce, says, “Belcamp is one of a group of Irish neoclassical homes with oval rooms. These include Lucan House, Farmleigh House and Mount Kennedy in Co Wicklow. It was beautifully maintained by the Oblates with high quality plasterwork on the walls and ceilings and magnificent sash windows.

“Gerry Gannon got the building in perfect order and didn’t put it to a new use. Its [current state] is a failure of responsibility and raises questions about the operation of Nama and its relationship with developers.

“This now needs a quality architectural response because of the sensitivity of the site but keeping the house as a single unit and developing the college as apartments would be appropriate subject to design, planning and zoning considerations.”

Fingal County Council worked closely with Gannon Homes to secure the site following the extensive fires in 2011. Helena Bergin, conservation officer for Fingal County Council, says, “There was a caretaker in the building initially – keeping it warm and looking out for leaks but this became untenable because of the attacks. Once the building became empty, there were constant attacks. I don’t understand why once a building is vacant, it is attacked like this. We should discuss these issues at [national] level.”

Now, Bergin says, with any new development she will be looking for reinstatement of any elements removed from the house for safe keeping: “Two of the main rooms in the house were badly damaged by fire so we will have to make a judgement call on repairs, but I would like to see an inventory of the statues and fireplaces removed so that they can be reinstated once the building is restored. I would also like to see the Harry Clarke windows reinstated in the chapel.”

Gannon Homes plan to develop the site for a mix of residential and commercial buildings, with Belcamp House and college buildings as the “urban centre” of a large-scale housing development. Michael Crowe from Conroy, Crowe, Kelly architects, says, “Initially, we hope to bring in sufficient housing to create a critical mass to make the place safe. We would hope to do the first phase of the housing development – 250-300 houses – near Belcamp House, with a total of 2,000 homes in the completed development.

“We plan to integrate the old properties into new developments – keeping the house as a possible corporate headquarters and the former college buildings as apartments. The site is only about five miles from Dublin city centre .”

Shane Daly, of Gannon Homes, adds, “As our principal banker, Nama supports us in the development of this site and we intend to apply for planning permission for the first phase early next year.”

Various past pupils have created online videos, photographs and web commentary on the demise of Belcamp College, so there will be a lot of interest in the future of the site.

Can you help? If you have information about an important building that has fallen into disrepair please email buildingsatrisk@irishtimes.com