Ruined farmhouse on Ringarogy Island, in west Cork, could cost €150,000k to restore 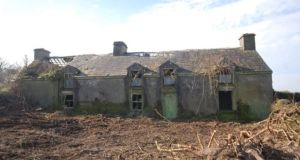 The Irish countryside isn’t short of falling-down cottages to be had for a song – electricity and water extra – but few carry such a high price tag as a crumbling old stone house near Baltimore in one of the poshest pockets of west Cork. Fresh to the market this week, the ruined farmhouse at Gortnalicky, on Ringarogy Island, has an asking price of no less than €200,000 through the veteran estate agent Charles McCarthy of Skibbereen.

Sitting on an acre of ground with views over Roaringwater Bay, the cottage has collapsed at one end, but there is considerable scope for it to become a “very nice” holiday home, according to McCarthy, whose clients include wealthy continental and English buyers.

He insists the six-digit price reflects the cottage’s rarity value and the area’s benign climate. “You’re in the St Tropez of Ireland,” he says. “I’m going around in short sleeves here. We had no snow this week.”

The property, which is owned by a local farmer and has not been used as a home for many years, includes a second, roofless cottage; both are ripe for renovation. “It’s really a blank canvas, and we are running out of that kind of property around here,” McCarthy says. “Twenty years ago you might have been able to pick up this kind of property for €50,000 or less, but those days are gone.”

The area is heavily dotted with holiday homes, many of them renovated to a high standard and owned by wealthy families from Cork, Dublin, the UK and farther afield.

The house has another distinct plus, McCarthy says, in that it is slightly elevated and looks over the bay. “Many houses of this kind were built in a dip, to protect them from the weather, and so they don’t have these views.”

McCarthy estimates the house could cost €150,000 to bring back to life. Refurbished homes in this part of west Co Cork regularly change hands for €300,000-€500,000. The farmhouse at Gortnalicky has the scope to provide more than one house in an area where planning can be difficult to secure. It is 2km from Baltimore as the crow flies but just under 6km by road, using the bridge that connects Ringarogy to the mainland.