A journey through time at converted Kilkenny church

Respecting its rich past, St Mary’s has been transformed into the Medieval Mile Museum 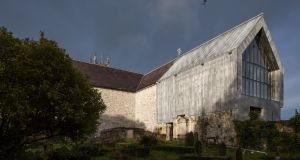 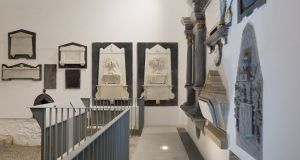 A complete wall of monuments was kept because the artwork was so deeply embedded into it, at Medieval Mile Museum, Kilkenny. Designed by McCullough Mulvin Architects 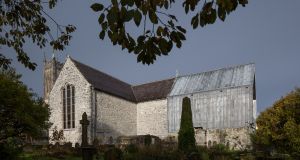 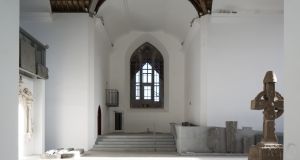 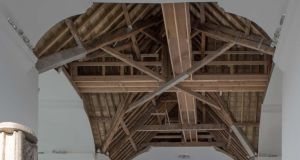 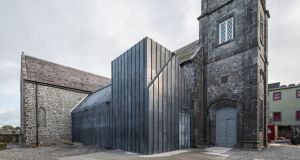 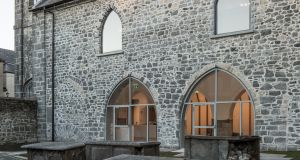 Conversion of the 13th-century church of St Mary’s in Kilkenny to a history museum began underground – digging down into its past – and ascended from there. Beneath and within the building, archaeologists uncovered burial vaults that had been added in the 17th century along with figurative and decorated sculpture.

Much had been added and subtracted over the centuries and it was architect Niall McCullough’s wish to follow the footprint of the original structure, some of which was no longer there, including the chancel walls at the end of the nave on the east side.

Built in an almost symmetrical cruciform, the church’s lost leg was something appraised by McCullough early in the job when he and architect Ronan O’Connor walked up to nearby Kilkenny Castle and looked at the church from on high. The two buildings were built by the same man, William Marshall, and not only could the architects appreciate the conversation between the two 13th-century structures from this perspective, but McCullough recounts how his mind could see the complete cruciform, filling in the gap.

At ground level, the now recapped chancel appears as you walk through the graveyard (with tombs and monuments dating from the Middle Ages to the 20th century) to the right of the entrance, and around the transept to be met with a majestic grey roof. It is, paradoxically, floating lead, the heavy material disappearing chameleon-like into similar coloured sky, and its structure self-supporting, not landing on any part of the ruins beneath it.

McCullough says: “The lead was used for its quality of material weight, density and colour; it had affinities with the stone, varied when wet and in sunlight, but had a malleable quality and an intensity of detail which was quite unlike the stone.” The same material was used to roof an aisle on the other side of the building.

On the re-roofed chancel’s other edge there is no lower wall and the cave-like structure hovers above wobbly tombs. From this undercroft you can see through a window into the main body of the church, one of many views into other spaces and times, all over the new building, adding to the layering theme set up by the strata uncovered during the archaeological investigation and building work. Glass-covered holes in floors reveal archaeological gems while openings in and beside walls capture and offer glimpses of what is coming next.

Layering also happens in the building itself whose floor was a stack of concrete panels in lieu of the disappeared original floor whose natural depth was nearly a metre below the new one. At an altar the two levels remain, allowing visitors to look from on high into the past.

Gypsum was slathered on the walls in the late 1940s, and removed during this project to reveal columns, decorated stone and blocked windows

Among the many interventions, and layering and splicing over the centuries, was a mid-20th century conversion into a parish and masonic hall, and a store for equipment, including mannequins, for local shops. In the 19th century a tower was added, and before that a medieval tower by the front door collapsed and over the years parts were blocked off, such as nave aisles screened off by windows.

Gypsum was slathered on the walls in the late 1940s, and removed during this project to reveal columns, decorated stone and blocked windows.

The church closed in the late 1940s when a storm blew part of the roof off and the building was offered to the government which agreed to take it on condition the roof was completely removed, as was standard practice for national monuments then.

Instead local man George Sherwood took it on, and gathered people to restore the roof and floor and used it as a parish and masonic hall, adding an upper floor in a design that cut into the 17th-century roof structure.

Long after this rescue mission, the State stepped up again and it was bought by Kilkenny Borough Council in 2010 with assistance from Kilkenny County Council and the Department of Environment, Heritage and Local Government.

When McCullough Mulvin Architects became involved, they wanted to uncover its history but not to simply restore it to its medieval state

Now renamed the Medieval Mile Museum it contains exhibits from the building and elsewhere including items from the National Museum of Ireland, with casts of Irish high crosses.

When McCullough Mulvin Architects became involved, they wanted to uncover its history but not to simply restore it to its medieval state, instead working to make the most of the church’s metamorphosed form, without attacking it further.

One decision was to use the mid-20th century ceiling scar to great effect. As you walk through the front entrance the sculpturally interlaced timber beams capture your eyes from on high, up past the contrasting white walls. Beyond this is a vast clear window showing sky – although crossing the length of the church and standing beside this window affords views out to Kilkenny city and its medieval roofscape. A balcony here looks back across the nave to the front of the church where another balcony stares back from atop steel stairs beside the front door.

The bright white walls run throughout the building tipping the usual duskiness of a church experience: no longer are we in the gloom looking up through a tall structure that reaches to God with coloured windows on high. The white works in a gallery fashion, letting the exhibits, including those that came with the building, from wall plaques to gravestones, to a single red human leg – all that remained from a fresco.

A complete wall of monuments was kept because the artwork was so deeply embedded into it. Following the theme of finding through-views and working with centuries-old decisions and interventions, the wall is shortened at each end to leave great gaps each side for the flow of light.

Going with the building and its idiosyncratic human and natural interventions, in both the structural form and the exposed layers, gives the new museum an honesty and calm. It makes for a revealing journey, moving from its exhibits to the structure itself, spanning the ages from medieval to contemporary architecture.

Can buying the right petrol save your conscience and the planet?
Real news has value SUBSCRIBE