Corafinne is situated in the most sought after location in Kinsale, Co Cork, and offers spectacular views 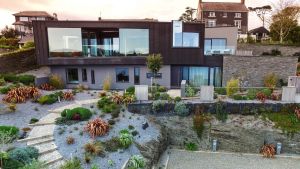 The Scilly peninsula in Kinsale takes its name from the Cornish fishermen who arrived in the area when the town was a major fishing port and decided to make the location their home.

It is no wonder they remained in this wonderful spot – which is within minutes of the town yet away from the hustle and bustle. Known locally as the Golden Mile, it is the most sought after location in Kinsale.

The current owners of Corafinne, one of whom is originally from Cork and based in the UK, sought a site in the area with the intention of semi-retirement. As business interests in the UK expanded, they have now placed their home on the market through agent Engel and Volkers with an asking price of €2.75 million.

It is an ambitious price, but this is not your average home, and houses in the area of Scilly often sell for well over the million euro mark.

Designed and completed by Kiosk Architects in 2013, every inch of this 282sq m (3,035sq ft) house perched on a 0.3 acre site screams attention to detail.

The property is inverted where all the living accommodation is on the upper floor to take advantage of the views which take in the harbour all the way to Castlepark peninsula.

The front of the house on the upper level features triple-glazed walls of glass which slide back to bring the views and the sea air inside. The streamlined kitchen, by London-based LWK with Siemens appliances, opens on to a terrace which also links to the living room. The terrace has slats overhead which close over in the rain, and open during sunshine – allowing for year round use.

A television in the living room can be hidden at the touch of a button in order not to detract from the views. Further high-tech features are remote-controlled blinds and an integrated digital system that in one command can close all the blinds, turn off the lights, switch some appliances to sleep mode and then activate the alarm. It doesn’t get any more foolproof than this – and there will never be that familiar “did I unplug the iron” worry.

The master bedroom is also located on the upper floor and it opens on to a private terrace, which overlooks the gardens as well as the water.

Downstairs, via a bespoke staircase that gives the illusion it is floating, are three more en-suite bedrooms adjacent to a flush wine cooler with capacity for a hundred bottles.

The gardens, designed by Lars Buelb are laid out with terraces, raised beds and a water feature and have been maintained by a local gardener so they are in fine condition.

Less than a minute walk from the property is the shoreline – where the famous 6km Scilly walk to the star-shaped Charles Fort begins, and the town itself is just minutes in the opposite direction.