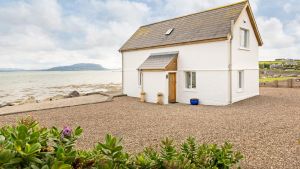 “It was the peak of the boom and the auction room was packed,” says Damien McCaffrey, a pharmacist-turned-developer originally from Co Fermanagh, now living in Belfast, who bought it as a family holiday home.

The Boat House at Raghly really is out on its own: it stands on a small peninsula near a headland overlooking Sligo Bay, directly beside a sandy beach, with a scattering of houses nearby. McCaffrey says that he swims there and once stood on the patio at the front of the house and caught mackerel in the harbour.

The house was originally a stone boathouse, about 15km from Sligo town. It was revamped and extended in the 1970s when previous owners – members of a Sligo business family, the Meldrums – had added a second storey to the building.

Following his purchase of the property McCaffrey refurbished it completely again and now the detached 67sq m (721sq ft) two-bed cottage on half an acre with views of the sea, Knocknarea and Ben Bulben, is being sold through Sherry FitzGerald Draper for €495,000.

Inside this is a small one-and-a-half storey cottage with a very simple layout: downstairs is an open-plan kitchen-cum-livingroom, and a double-glazed picture window frames the super sea views. The kitchen has hand-painted hardwood units; the oak floor was resanded and revarnished last year.

A white-painted spiral staircase – originally from a convent in Mayo, McCaffrey was told by the previous owner – leads to a small landing with some bookshelves and a Velux overhead.

Both double bedrooms have windows with sea views, looking on to Sligo Bay and Drumcliff Bay. The family bathroom is up here too.

The house was rewired, replumbed and storage heaters replaced by a wood-burning stove which heats a back boiler. uPVC windows were replaced with cedar, which is much more durable, says McCaffrey, and the house is connected to the mains water system.

The garden has been landscaped: the house is surrounded by gravel, with stretches of lawn at one side and an organic garden in raised beds at the other.  There’s an enclosed area with wooden benches built into a small hill or “mound”. “It’s an outdoor room, very protected from the wind,” says McCaffrey.

The Boat House is about a two-and-a-half hour drive from Belfast, and around 70km from Knock airport – a factor which might make it attractive to overseas buyers, he believes.