Knockdrin, owned by Ferdinand von Prondzynski, has dropped in price from €13.5m to €12m 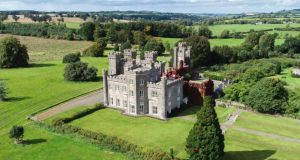 Knockdrin: the 19th-century neo-Gothic house sits on more than 400ha (1,000ac) near Mullingar

Given the disaster that was country-estate sales last year, it’s no surprise that January has brought with it a substantial price drop for the Co Westmeath family home of the former Dublin City University president Ferdinand von Prondzynski.

Knockdrin, a 19th-century neo-Gothic property on more than 400ha (1,000ac) near Mullingar that launched to market just over a year ago, has dropped its price from €13.5 million to €12 million. It’s hardly bargain-basement stuff, but David Ashmore of Ireland Sotheby’s International Realty describes it as a necessary tweak to reflect the “market we’re working within at the moment”.

Although the number of potential UK buyers has dwindled dramatically for country homes here, Ashmore maintains there is still a cohort of US- and China-based buyers looking for what the midlands spread has to offer. That includes the seven-bed, 1,800sq m (19,375sq ft) castle, which was once described as “a Georgian house in fancy dress”. Half of its 400ha is arable land, 160ha (400ac) is woodland, and the rest is lakes, gardens and farmstead.

Mr von Prondzynski currently lives at Knockdrin, having stepped down from his role as principal of Robert Gordon University, in Scotland, last August.

The most prominent and arguably best country estate on the market, the former Guinness estate at Luggala, Co Wicklow, remains for sale with a whopping €28 million price tag. A unique property on 2,000ha (5,000ac) steeped in Guinness family history, the former home of the late Garech Browne has been on the market through joint agents Ireland Sotheby’s and Crawford’s for two years.

Following Knockdrin’s modest knockdown after a year, we can probably expect Luggala’s hefty asking price to be revised downward soon.