Imposter syndrome convinces you that luck, not hard work, has got you to where you are 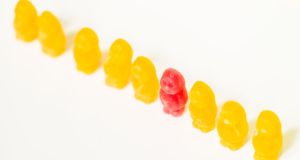 Jelly baby confectionary sweets in a row. One is red the others are yellow. The background is white. Individuality or discrimination concept.

Sitting in a room with 250 other women, all of whom are embarking on careers, businesses and developing ideas they’re so eagerly passionate about should be overwhelmingly inspiring.

Which it is, of course, but as I sit in that room at a Women’s Inspire Network event, I feel less than brave, less than the forward-thinking woman I am and the inward tug of self-doubt makes me avoid conversations.

What would I say?
Why would they listen to me?
What do I know?

I am convinced I will be caught out as a fraud and don’t deserve any kudos for my accomplishments as a writer.
I’m not alone.

Imposter syndrome, a psychological term for doubting one’s achievements, is one of the biggest blocks to appreciating your own success and not putting it down to dumb luck.

According to a national study of 3,000 UK adults, two thirds of women suffer from imposter syndrome with 18 per cent of men less likely to experience this in comparison to their female counterparts.

Susi Lodola, counselling psychotherapist, counters this with the fact that early studies indicate, while it is a problem among high-achieving women, recent research shows men experience imposter syndrome at a similar rate and gender is not a contributing factor. Lodola says, “We know that imposter syndrome is most likely to occur in people for whom success came quickly; for example, individuals with high achieving parents, first-generation professionals, students and members of minority groups.”

Imposter syndrome makes us believe we have fooled others into overestimating our abilities. We believe our success does not come from our ability or intelligence but rather from luck or someone else’s oversight. We fear being exposed as an imposter and being caught out. Aoife O’Brien of empowerment coaching, suffered with imposter syndrome throughout her career. She says, “I worked in Australia for a little while, and during the hiring process they asked what salary I would like. The number I gave was much higher than I really expected. They offered me what I asked for plus 5 per cent more. I thought there must have been some sort of mistake. Did they get my papers mixed up with someone else’s? I felt that despite the fact I had asked for it, it was somehow more than I deserved.

“When setting up my own business, it knocked my self-confidence, I was filled with self-doubt, and watched my back because I thought I would eventually be found out. But now, I can empathise with clients because I have been there myself. I can help them discover what works in building their own self-belief, and remove the blocks getting in their way.”

Experiencing imposter syndrome can make you believe you are not good enough, that others are more qualified and more experienced than you, or that others will see you as a fraud. We have little confidence and repeatedly doubt and question ourselves.

Marian Kennedy, PPR Healthcare Ltd, found a way to build her confidence after feeling imposter syndrome encroaching on her work life. “The first time I heard the phrase,” she says, “was last September at a Network Ireland event where there was a discussion about imposter syndrome and I thought, that’s me. There was a word for what I was feeling. It finally made sense.

“At the start of my journey with PPR Healthcare and developing products for women after birth with A New Mum, there was always a self-doubt that I shouldn’t be doing it, or I was chancing my arm. I never perceived myself as a confident person, so I did a lot of programmes to help me along the way to boost my confidence. I attended an Acorns event where Paula Fitzsimmons said, “Just say yes. Keep saying yes, no matter what you do.” I thought if I want to be successful and put myself forward, I had to keep saying yes and putting myself out there.”

Louise Tyrell, founder of ZenLife Mind Body and Health, has a history of low self-esteem and struggled with imposter syndrome. “In 2001 a friend asked if I would like to take over her contract with Bank of Ireland as she was emigrating. At first, I was thrilled she asked me to take on this prestigious role. I was qualified and experienced and felt, at first, ok about it, but as my mind mulled it over, I doubted my ability and started to panic. I chatted with a therapist friend, practiced stress management techniques to keep the nervousness at bay and practiced positive, uplifting affirmations. Over the years I have worked a lot on building up confidence, but I do still suffer from imposter syndrome at times.

“Last year I wanted to return to teaching yoga but struggled to gain enough confidence to overcome imposter syndrome. Even though I have 20 years experience teaching yoga, I started to compare myself with the young ones and doubt myself. It took courage and conviction to up-skill and get myself into great yoga teaching condition so that I could feel confident. I suppose it’s an ongoing process of tackling it as it appears and trying to stay strong and believe in myself.”

In order to combat imposter syndrome, Lodola suggests that we look at our core beliefs which we hold about ourselves. “Those core beliefs are developed during your formative years,” she says, “and are influenced by your environment. As a result, we tend to find it difficult to recognise those beliefs, as we think they are normal, and everyone holds the same belief. Often those beliefs are around thoughts such as: ‘I must be perfect all the time for others to approve of me’; ‘if I don’t exceed expectations I won’t be loved’: or ‘I am not good enough the way I am’. It’s often hard to confront those core beliefs as most people are not even aware they are holding them. But there are steps you can take that will help overcome imposter syndrome.”