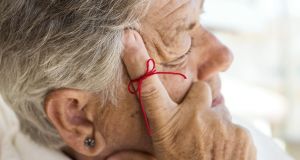 Four thousand people (an average of 11 people every day) develop dementia in Ireland each year.

And yet, many in Ireland do not understand the condition, which is caused by different diseases of the brain.

“Our research revealed that one in two Irish people know or have known someone with dementia,” says Prof Brian Lawlor, consultant psychiatrist and chairman of the “Dementia: Understand Together” campaign. “Despite this, only one in four people feel they have a good understanding of what dementia is and what it isn’t. This lack of understanding can result in friends and neighbours feeling awkward or embarrassed when someone they know is diagnosed with dementia, so often they say and do nothing.

1) There is nothing a person can do to reduce the risk of dementia.
Not true. There is growing evidence that by keeping socially engaged and learning new skills or hobbies, as well as exercising often, not smoking, eating healthily, reducing alcohol intake and controlling high blood pressure, can help to lower the risk of dementia. Challenging the brain through crosswords, Sudoku and word searches may also be helpful in maintaining good brain health and in building cognitive reserve.

2) Alzheimer’s disease and dementia are the same.
Not true. Dementia is an umbrella term to describe a set of symptoms that occur when brain cells stop working properly. Dementia is caused by a number of diseases that damage the nerve cells in the brain. There are at least 400 different types, the most common of which is Alzheimer’s disease, with others including Lewy body disease and fronto-temporal dementia. Common symptoms may include difficulties with thinking and language, problem-solving and carrying out everyday tasks, as well as issues with memory loss and changes in mood and behaviour.

3) Dementia is a natural part of aging.
Not true. Dementia is not a normal part of getting older. In fact, nine out of 10 older people don’t develop dementia, and a lot of people mature into their 80s and 90s without much memory decline.

4) Only older people develop dementia.
Not true. While dementia is more common in people over 65, younger people can develop dementia too. In someone under 65, it is called early or younger onset dementia, where people diagnosed may have a family history of dementia.

5) Once you develop dementia there is nothing that you can do.
Not true. Although there is no cure, there are steps that a person can take to potentially stabilise the course of dementia - at least for a time. These include medical treatment, community supports and practical life changes. Crucially, a diagnosis of dementia, does not mean that people cannot still live well with the condition.

6) People with dementia can’t understand what’s going on.
Not true. Very often a person with dementia can understand much more than they can express. It is important to communicate directly to the person rather than speaking to their carer or family member. You may just need to give the person time to gather their thoughts before they respond.

7) Someone with memory loss must have dementia.
Not true. Depression, stroke, infections, severe vitamin deficiencies, thyroid abnormalities and even side-effects of medications can cause memory complaints, which could be mistaken for dementia. There is also a certain amount of age-related forgetfulness that we can all experience. If there are concerns, always consult a GP in the first instance.

If you are worried that you or a loved one may be experiencing symptoms of dementia, it is a good idea to speak with your GP. You can also contact a dementia advisor by calling Freephone 1800 341 341 or visiting understandtogether.ie to find out more.