Things you learn only when you start using a wheelchair 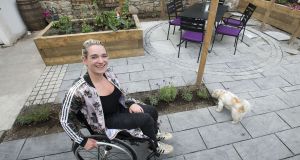 Louise Bruton: “My tee-shirts, jumpers, jackets and coats regularly fall victim to being covered in bobbly bits of wool as the friction between the seat of my wheelchair and my arms, shoulders and back causes them to wear down.” Photograph: Dave Meehan

When you start using a wheelchair, there’s a number of things your doctors and nurses can’t tell you. The things you pick up from the lived-in experience, the things that can remain a mystery for years until, one day, the lightbulb switches on and you realise: “Ah! It’s because of the wheelchair.”

It’s an endless learning curve, with things improving as years go on or things become a little harder as your wheelchair or clothes suffer from wear and tear. These are my lessons, with some highlighting just how thick I can be.

Flowing skirts and long coats are aspirational items of clothing for me. My lovely winter coats and my long, flowing skirts – skirts that I always picture Florence and the Machine wearing – will inevitably end up destroyed as they drape over my large wheels, get caught in the small wheels and wind up torn, frayed or covered in mud and tyre tracks.

My tee-shirts, jumpers, jackets and coats regularly fall victim to being covered in bobbly bits of wool as the friction between the seat of my wheelchair and my arms, shoulders and back causes them to wear down. Whether it’s a cheap tee-shirt from H&M or an expensive one from All Saints, the result is always the same; everything I wear on top looks like it was attacked by a giant moth – from behind. That’s some haunting imagery for you.

And speaking of friction, for years I suffered from something I called Night Rash. It gets the capital letter treatment because Night Rash felt like a person that followed me everywhere. Night Rash is a rash that took my armpits under siege almost every night for the last six or seven years, so much so that I keep a bottle of aloe vera and a packet of Piriton on my night stand. The itch would keep me up for hours and, last month, in a state of sleep-deprived mania, I shouted out loud to nobody in particular: “This is obviously a medical condition.” Before bringing myself to the GP and explaining my peculiar symptoms (“It’s an armpit rash that only comes at night”), the diagnosis hit me like a ton of bricks. Because I use my arms all the time, I was getting thigh burn – but in my armpits. During the depths of the heatwave this summer, a friend told me, as she was rubbing anti-chafe cream onto her legs, that she was so jealous that I’d never experience thigh burn. Oh, how the tables have now turned. Try experiencing armpit burn, amiga.

With all the pushing and rolling and heaving and huffing and puffing in a manual chair, your hands, arms and shoulders feel the burn. My nails break and my hands are like a fisherman’s. The muscles in my shoulders often tighten up, making it near impossible to move without wincing. The pain does not come from acting the loola, as I am so good at doing, but from slouching over my laptop. I know my local physio and at least once a year, I have to go on a six-week burst to undo the damage of my slouch. I’ve had to learn to listen to my body properly. Every twinge, every thud of pain means something and if I ignore it, it can build up to make me immobile and when I fight so hard for independence, that’s something I need to resist.

In order to fight any signs of my body giving up on me, I’ve had to learn to become stronger. Swimming has replaced the gym in my life. There’s just something about waiting in line for a spot by the weights as grunting bodybuilders flex and sweat that makes the pool a more enticing alternative. But to swim, I’ve had to ditch any flicker of insecurity about my body. But, to be honest, I haven’t noticed anyone staring or paying an unnerving level of attention to me as I flap about in my laps but if they do stare, I hope that I will bore them into realising there’s no need to stare at disabled people. I’ve learned that if I put myself out there, in general, it might lessen the fear of someone else diving in and I think that’s the best thing I’ve learned so far.

LS Hilton: I wish my sex life was half as exciting ... I really do
Real news has value SUBSCRIBE