Smokers, give it up 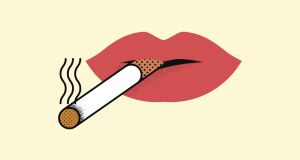 More women are being diagnosed with smoking-related cancers.

It’s that time of year again, with thousands up and down the country currently vowing they have quit smoking for good – and indeed many of them will succeed as there are now more quitters than smokers in the country.

However, 20 per cent of the Irish population is still addicted to tobacco, with 17 per cent smoking on a daily basis and 3 per cent occasionally – and while there are more male smokers than female, the Irish Cancer Society is concerned that more women are being diagnosed with smoking-related cancers, and this, they say, is something which can be rectified.

“We have a major concern about the high rates of smoking among Irish women, particularly because lung cancer has now overtaken breast cancer as the main cause of cancer death among women in Ireland, ” says Kevin O’Hagan of the Irish Cancer Society (ICS). “Smoking increases the risk of lung cancer and at least 13 other cancers; and one out of every two smokers will die from a smoking-related disease. These stark facts provide the reason for many women to attempt to quit.”

More than half of smokers are at least thinking about quitting

The cancer-prevention manager says more than half of smokers (57 per cent) are at least thinking about quitting and 40 per cent of current smokers have made an attempt to quit in the past 12 months. “Over 150,000 smokers successfully quit smoking in the past year and we now know that there are more quitters than smokers in Ireland,”he says. “So we can see first-hand how quitting smoking has transformed the lives of the women who have completed the Irish Cancer Society’s We Can Quit programmes and are now smoke-free.

“But trying to quit without support is really difficult. The first thing to do is to plan when and how you’re going to quit. Get support from family and friends and talk to your GP or pharmacist about nicotine-replacement products and medications, which will greatly improve your chances of quitting. Motivate yourself, change your routine, get active and think positive and take one day at a time, and know that you can finally kick this habit for good.”

About 416,000 men, or 22 per cent of the male population, are smokers compared to just over 333,000 (or 17 per cent) of women. But according to research from the HSE, among young smokers, there are no differences in prevalence by gender with 8 per cent of boys and 7 per cent of girls (aged 10-17 years) reporting that they are current smokers. In 1998, more girls than boys smoked, however in 2014, marginally more boys than girls smoked.

But although smoking-related cancers are on the rise among women, more female smokers than men are quitting. “While smoking prevalence has reduced overall in recent years, the trend is very different for males and females,” says the spokesperson.

“A recent HSE report showed that during the period from 2005 to 2017, there was a 33 per cent reduction in the smoking prevalence among females, compared with a reduction of just 5 per cent among males. This reflects in part the difference in how the tobacco epidemic has unfolded for men and women. But a significant reduction on current smoking prevalence among both males and females is required if Ireland is to become “tobacco-free” by 2025.”

Dr Patrick Doorley, chairman of Ash (Action on Smoking and Health), says tobacco manufacturers have targeted women through design and colour of cigarettes and packets in the past. However, the introduction of standard packaging has helped to reduce the impact of this marketing ploy.

“Plain packaging has hugely helped and these days significantly fewer children can identify the different brands of cigarettes which prove that it is working,” he says. “Of course, people are still smoking and research has suggested that many young girls who take it up have low self-esteem – and factors such as a worry about weight gain or wanting to fit in are also part of the reason why many take up and continue to smoke. But the biggest factor seems to be socio-economic and the highest prevalence of smokers is among the least well-off in society.”

The average smoker spends €4,000 a year on their habit – that’s the price of a family holiday up in smoke

Doorley says not only can smoking have a detrimental effect on physical health, it also impacts negatively on finances. “It is well documented that smoking causes death, disease and disability on a large scale, for both males and females,” he says. “It has been causally linked to diseases of nearly all organs of the body, is known to diminish health status and to cause foetal harm. And, on top of that, the average smoker spends €4,000 a year on their habit – that’s the price of a family holiday up in smoke.”

Personal health and wealth aside, most recent data reports that 11 per cent of mothers smoke during pregnancy in Ireland. This is a particular concern and leads to poorer outcomes for both the mother and infant including impaired foetal growth and development, pre-term delivery, birth defects and sudden infant death.

Giving up smoking isn’t a walk in the park, but there is plenty of support out there for anyone, male or female, who wants to give it a try. And Doorley says the benefits of quitting are immediate. Giving up also promotes physical health gains with regard to respiratory health, pulmonary and cardiovascular function, reproductive health and gastro-intestinal problems and mental health gains, including a reduction in the prevalence of anxiety and depression, with life enjoyment and satisfaction levels increasing towards the level of a never smoker.

“The single best thing you can do for yourself is to quit smoking,” he says. “Some people prefer to do it on their own, but it is always good to get some support, particularly as most will try several times. But my advice is not to give up trying – if you fail, start again as quickly as possible – and keep in mind the goal of a healthy smoke-free life where you are physically and financially better off.”