Shaping our moments in small, actionable ways in order to live the life we want 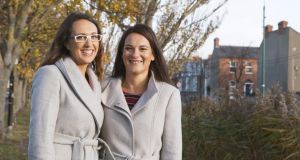 The Power of Small: psychologists Trish and Aisling Leonard-Curtin understand how we often rush through life falling into the trap of big promises and thereby big disappointments. Photograph: Aoife Herrity

We live in an age when our lives are catapulted into specific boxes which we believe we should own and accomplish. Study. Career. Relationships.

We see opportunities and risks ahead of us but the pressure to be and do our best is overwhelming. We’re afraid to fail. We’re afraid to show our vulnerability. We struggle. We sink into our comfort zones and live with our regret as we believe we should be happy and feel good all the time. Life is not perfect, nor will it ever be.

Psychologists Trish and Aisling Leonard-Curtin understand how we often rush through life falling into the trap of big promises and thereby big disappointments. They have written the Power of Small, an understandable and honest self-care book with an emphasis on self-compassion, so we can change our life. A married couple, Trish and Aisling see clients at their practice, Act Now Purposeful Living, in Dublin. Their understanding of the Power of Small comes from their personal journeys with depression and anxiety and their wealth of experience as psychologists.

Trish’s story saw her hospitalised in 2006 but stems back to her childhood which many can appreciate and understand. “I grew up in a context and culture which communicated the message that unwanted emotions are to be avoided and suppressed,” she says. “I was depressed from a young age. I had perfectionist standards which meant I didn’t take any steps to get help because I didn’t want to get anything wrong. I ended up confining myself and avoided life in the comfort zone of my bedroom.”

As with many of us, the path Trish wished for herself veered away from her when she didn’t get the points she needed to study psychology at college. She fell into advertising which was not where she wanted to be and questioned many aspects of her young life without the support network she needed.

“Ultimately,” she says, “I was unable to function in the culture which encouraged drinking lots of alcohol. I was also struggling to understand my identity, including my sexuality, in an era where there were no visible role models and nowhere to go to meet other people who were gay. I felt increasingly isolated and had no friends or allies either within the LGBTQ community or outside of it.”

In 2005 and 2006, Trish attempted to take her own life multiple times, which resulted in two in-patient hospitalisations. She recalls how she felt as though she had lost everything but with the help of therapy started to rebuild her life.

Her journey with the Power of Small began after reading Man’s Search for Meaning by Viktor Frankl. She started looking for small ways to integrate more meaning and purpose into her life. This concept is not without its difficulties, it’s not a race to get better. It’s about taking baby steps in understanding who you are, where you are, and where you want to be with a large dose of compassion and acceptance which Trish experienced first-hand.

“I originally thought I needed to be fixed,” she says, “that in order to have the life I wanted, I needed to be better first. I ended up not doing anything at all or taking any towards moves. It took me a while to learn that it was the other way around. I needed to go out and take actions to build the life that I wanted, one small step at a time towards a life worth fighting for.

I just wanted my life to be better, but really, I had no idea what better would look like in my life

“I just wanted my life to be better, but really, I had no idea what better would look like in my life. I never had a tangible conceptualisation of ‘better’. I thought better meant not having any more ‘negative’ emotions and that the good life was the absence of those ‘negative’ thoughts and emotions. I came to realise having the full spectrum of emotions is the cost of entry to a rich and meaningful life.”

The Power of Small is an evidence-based concept which encourages us to shape our moments in small, actionable ways in order to live the life we want, one decision at a time. Grounded in acceptance and commitment therapy, taking these small steps breaks us out of the inflexible routine we can find ourselves caught in. Limbering up for life, as Aisling and Trish put it.

Trish found the concept of shifting “buts” to “ands” very liberating, saying she didn’t need to get rid of unwanted thoughts and emotions before she did something she really wanted to do. “Previously,” she says, “I always wanted to study psychology and help other people, but I was too broken. I eventually learned to shift my perspective to acknowledge that I can sometimes have the thought that I am broken, and I can be a psychologist and help people.

“Once I connected with what was important to me, and the values I wanted to live my life by, I had a compass to set my course towards my purpose. I no longer felt like I was merely existing in my life on autopilot, just being bumped along day by day and mindlessly reacting to what life threw at me. I continue to feel like I have more agency to shape the direction of my life, something I didn’t feel at the times I attempted suicide.

“The Power of Small way didn’t happen in one fell swoop and it does take continuous commitment and dedication towards what matters most. This process of reshaping my perspective and expanding my life is an ongoing path rather than a neat before-and-after hero’s journey. I still have days when I struggle to get out of bed or when it takes me five minutes to zip up my jacket.

“However, the skills help me to get back on track quicker than before. Whereas before my struggles and suffering were all I could see, and felt like an overwhelming ocean, my difficult days are now just drops in a vast ocean that contains a whole lot more than my struggles.”

The Power of Small by Aisling and Trish Leonard Curtin is published in Trade Paperback by Hachette Ireland, €16.99

What sold for about €355k in Chapelizod, D9, Blessington and Stoneybatter
10