Self-image and beauty notions in age of social media

Body confidence: We are being psychologically destroyed by idealised representations in ads and fashion 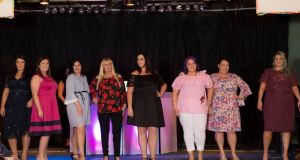 Ireland’s Got Curves: “In the fashion industry, plus size starts at a size 12, which is below the average female clothing size in Ireland,” says Sharon Dmake.

Being exposed to fashion and beauty advertisements every day is not simply about selling products, but rather has a side-effect of selling a concept and an ideal. Throughout the fashion pages, pop-up ads, and the stylised social media campaigns, readers and viewers are fed values regarding identity and sexuality, and what is normal and popular. We are told what we should do and think, and how we should look and live.

We are sold a mindset through repetitive branding and clever advertising. All of this plays a significant part in how we view ourselves and can damage not only our minds, ideas but our confidence and body image.

Body image concerns are relatively common, and poor self-image – influenced by the world of advertising, fashion and social media – can play a significant part in psychological conditions.

According to a UK Mental Health Foundation report last year, one in five of us have felt shame, dissatisfaction or disgust by how we look. And a third of us felt depressed because of our physical appearance.

Comparing ourselves to unrealistic images is a common concern but we are all deserving of being confident and happy in our skin without the weight of a negative, unachievable body image being forced upon us.

Adding to this, there remains a narrow representation within our magazines and on our screens, meaning we are often left with an unattainable ideal we cannot identify with. The fashion industry has responded slowly to the demands of consumers to be more inclusive, however campaigns have been moving in the right direction in recent years. More needs to be done, however, to include a greater range of models if the next generation are to be comfortable and accepting of their bodies and identity.

“Fashion still predominantly features very slim, very young, Eurocentric, flawless images,” says Prof Carolyn Mair, a fashion psychologist. She has developed an MA course in fashion psychology at the London College of Fashion. “Yet, fashion consumers come in every age, shape, size and ability with every skin tone and skin definition,” she says. “Most fashion consumers are still poorly represented in fashion imagery. For many, such marginalisation leads to feelings of insecurity.

“They may try to conform to the images they see but, because for most, this is unattainable, many resort to cosmetic interventions, and unhealthy diets and exercise regimes. Despite the body confidence movement, evidence shows that even a brief exposure to fashion imagery can make us feel worse about our bodies.”

We spend on average two-plus hours a day on social media. From consistent scrolling of filtered, perfected images, targeted advertising from third parties and the draw to celebrity status, we are viewing a curated timeline of simulated perfection which is far from the reality we see in the mirror. Self-esteem is greatly knocked by this fabrication. Prof Mair recognises that our self-esteem is a measure of how we believe others see and value us, which is measured against the norm.

“Because we are bombarded with fashion imagery, we believe this is the norm,” she says, “and when we don’t meet it, our self-esteem, and all its associated components, suffers. Recently, because of social media, we are witnessing a backlash to the perfected image with people posting ‘natural’ images of themselves and many vlogging to show others how to change from ‘plain’ (ie, like most of us) to gorgeous. This move for authenticity has been very well received by fashion and beauty consumers.”

However, as Sharon Dmake recognises, our passion for selfies has been ever on the increase with the average of 15 selfies taken before the correct angle is achieved then photoshopped – via face-slimming, leg-elongating, face-smoothing and teeth-whitening apps. Is it any wonder our body confidence has taken quite a blow, she asks? “Social media and what we post is selling a photoshopped view of the world and the people in it,” says Sharon, who created Ireland’s Got Curves, a day out which showcases models sizes 12-34, and places no upper age limit on the models.

“When we scroll down the 1000s of images, all fixed to sell us a certain look and image, even if we are not actively seeking it, it is still being programmed into us,” she says. Sharon is a former plus-size model, who started a self-love journey after losing four stone and completing her first triathlon size 18 in 2016.

“If we didn’t have insecure feelings about ourselves, the fashion and beauty industry would collapse in a heartbeat. In the fashion industry plus size starts at a size 12, which is below the average female clothing size in Ireland. Women’s bodies change at different times of their life; after childbirth, illness or age to name a few. If we continue to listen to what we are being told the norm is, how are we ever meant to be happy? What are we teaching the next generation and how will we ever expect them to have self-love and be comfortable in their own skin?”

With a weekly online show, On the Plus Side, featured on the Irelands Got Curves Facebook page, inviting viewers to watch, comment and meet a new community of positive thinkers, Sharon aims to fill social media with diversity. “In 2016, I had enough of waiting for something to happen in the Irish fashion industry for girls with curves, so I decided to bring the first-ever curvy convention to Dublin. Everyone wears clothes, so everyone should see clothes on everyone,” Sharon says. This was taken a step further when Ireland’s Got Curves created an unlimited event which saw Special Olympics Ireland athletes modelling on the catwalk.

In order to promote positive body image, we need social media platforms to recognise the necessity of such promotion by supporting the reporting of discrimination and bullying. We need the fashion industry to be proactively inclusive. And we need greater education for parents and children on healthy and positive body image. Positive body image needs greater understanding. The pressure to look a certain way is a big problem with social media. And a habit which is difficult to break as our addiction to the online world and perfection prevails.

Body Confidence
Part 1: After serious illness or injury
Part 2: Our idea of beauty is diverse
Part 3: Celebrating my disabled body
Part 4: Including men in the conversation
Part 5: Self-image in age of social media

How technology and social media is undermining family relationships
5