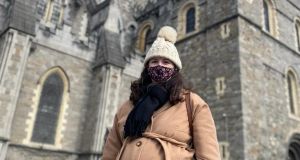 Six weeks to go in the pregnancy and in a Level 5 lockdown we decide we’ll take a little holiday – a European city break. We settle on Dublin, capital of the Republic of Ireland. Lucky for us, it’s within our 5km.

We each book a day off work, download a self-guided walking tour and take ourselves on our daily walk around the city centre. As city breaks go, it isn’t a bad one.

The day begins: we wake up in our self-catering accommodation and fix ourselves breakfast. The accommodation is pretty nice – homely, I would say – but would maybe lose points for cleanliness. Workmen who are in the garden fixing sewage pipes keep asking us questions about the property and for permission to look down toilets, etc. I find them a bit familiar, to be honest, considering we are on holiday.

It’s always nice to listen to local media when you’re away, so we turn on the radio we find in the corner of the kitchen and it’s tuned to the national broadcaster. The presenter, a Ryan Tubridy, is talking about some upcoming virtual events. (God bless his enthusiasm, because it didn’t sound too exciting to me.)

We head for the city centre and it’s a beautiful day.

The audio guide tells us the Latin motto of the city, which translates as: “The obedience of the citizens produces a happy city.” Whether Dublin is happy or not, it appears to be obedient: everywhere is quiet and we have the place to ourselves. It feels as though we’re up early, ahead of the crowd and out and about before the city has even opened up. Except that it’s already 11am, there are no crowds that will be joining us and the city will not be opening up. Not today anyway.

First stop on our tour is a Viking longboat statue on Essex Quay , then Fishamble Street, up to Christ Church Cathedral, Dublin Castle, City Hall, Temple Bar and round by College Green to hear about the Irish Houses of Parliament and Trinity College.

We bump into a friend along the way and feel terribly cultured – casually knowing people living in European capitals! He recommends a bakery on the corner which is open and now it really feels like a holiday.

I should tell you that I have been to Dublin before. I went to college there and worked there. I met my husband there and actually we got married there. It’s so nice to see the city centre again. Nearly every cafe, pub, restaurant, street and even convenience store has a memory of a place where we used to live. Really live.

But even though we’ve lived there and even though it’s currently “locked down”, we are still able to discover new things about Dublin: Isolde’s 13th century Tower, hidden in plain sight on Exchange Street; the khachkar (Armenian cross-stone) in memory of the victims of the Armenian Genocide, which bears a carving of a Celtic cross with an Armenian cross within it, on the grounds of Christ Church Cathedral; or that the “Bar” in “Temple Bar” refers to a sandbar and not a pub.

We eventually call it a day around Merrion Square when it’s clear that what started out as a walk has descended to a slow waddle. Plus, I’ve really been pushing my luck being out so long without easy access to a toilet.

One glorious benefit of visiting a city when everything is shut is that you can’t go into a museum . . . even if you wanted to. I promise myself I will Google Image the Book of Kells later on and happily head on home. I would highly recommend it.

Part 1: This is all getting a bit Angela’s Ashes
Part 2: We got bad news at the first baby scan
Part 3: What’s the oldest woman you’ve delivered a baby to?
Part 4: Not yet telling your colleagues about the baby
Part 5: I go in to the scan and it turns out, I do miss my husband
Part 6: Was she asking if the baby had magically appeared?
Part 7: I am more apprehensive about having a second child
Part 8: I’m living for my monthly maternity check-ups
Part 9: We decide we’ll take a little holiday