‘We got the words, I’m sorry, there’s no heartbeat. I just started screaming hysterically’

Anne-Marie Murtagh lost her son, Patrick, at full term and even though she went on to have two more children, the trauma and grief are still raw 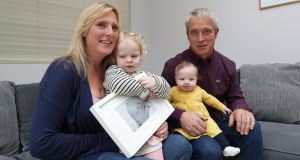 Anne-Marie Murtagh, holding a photograph of her son Patrick, who was stillborn, with daughters Hope and Grace and husband Paul Flood. Photograph: Nick Bradshaw

We’re not meant to outlive our children. It goes against nature’s plan. And yet, for some parents, the harsh reality of life that doesn’t go according to plan means they become part of a club that no one wants to belong to, and no one ever asks to join.

Anne-Marie Murtagh’s pregnancy came as a welcome surprise following a 10-year gap. Her pregnancy was healthy and uncomplicated, but because of the size of her previous baby who had suffered shoulder dystocia at birth, she was keen not to go overdue. At her 40-week check-up, however, all was deemed well and she was sent home to be seen again the following week.

Five nights later, Anne-Marie’s pains started. “I sat up half the night and he was kicking away mightily. I was telling him to calm down and we’d be meeting him soon.”

The next morning, while still having irregular pains, she went grocery shopping with her husband. Afterwards, she realised she hadn’t felt the baby move in a while. “I followed the instructions the hospital give: lie down, drink something cold, drink something warm – still nothing. I said to my husband that maybe we should go into the hospital.

“They brought me to a room to scan me and we got the words, ‘I’m sorry, there’s no heartbeat’. I just started screaming hysterically. This couldn’t happen, this wasn’t happening, but unfortunately it was. I literally lost the ability to speak, so Paul, the bravest man on the planet, came home and told them all individually that their long awaited for baby brother died.”

Baby Patrick was born the next day “ever so silently, quietly and beautifully”.

“We brought him home on the Tuesday and we said goodbye to him on the Friday. During that time here in the house, I tried to make things as normal as possible. We had family photographs done with Patrick. I walked around the house carrying Patrick. I read stories to him. I sang to him. I ensured that they all held him and were not afraid. Even though he wasn’t alive, he was still their brother.”

The weeks and months that followed were a huge struggle for Anne-Marie. She functioned for her other children, but found leaving the house difficult.

She sought counselling for her teenagers and involved her younger children in play therapy. Once she was comfortable they were coping, Anne-Marie “fell apart”.

Her husband Paul “stayed strong for the family”.

“He was hurting too,” she says, “but I was so lost in my grief it took me a long time to see that. Grief like that can literally make you or break you. We worked on it together. We took some time out and we talked about how we were both feeling and then we went in different directions to look after ourselves.

“A huge element of compassion fell over the whole house. Everybody’s attitude changed. The bickering stopped for a long time between the kids. Everyone was very gentle with each other.”

While Anne-Marie found huge support in her “mum-tribe” and kind neighbours who left food on her doorstep without intruding, others avoided her. “Parents I knew, who I thought would have been right there, were walking across the school yard in avoidance and that hurt.”

Anne-Marie has since had two more children which she says led people to believe she “was fixed” but adds “the trauma never leaves you. You learn to function and live around it. Patrick should be starting playschool this week and he’s not. It’s another milestone that rips at my heart.”

Read: When a child dies: ‘Grief doesn’t have a clock’