‘Women have to be empowered or the planet cannot survive socially, environmentally or economically’ 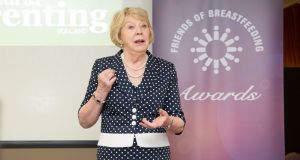 Sabina Higgins has called the “global movement” for breastfeeding “probably the most important thing in the world”.

“To me it is terribly important,” the wife of President Michael D Higgins told the Friends of Breastfeeding Awards at the Osprey Hotel in Naas. “It is really what will save the planet.”

At the annual event, Mrs Higgins emphasised the World Health Organisation’s recommendations of exclusive breastfeeding to six months and the role of breastfeeding in the United Nations’ sustainable development goals. “Women have to be empowered or the planet cannot survive socially, environmentally or economically. You are part of a great, big global movement that has to happen”.

Speaking about the history of breastfeeding in Ireland, Mrs Higgins said she was “very moved that things have moved forward so much. When I started out in 1974 (as a mother), nobody seemed to know about breastfeeding. No doctor mentioned it, no one in obstetrics, no nurse. It was just an unknown.

“And that’s amazing, because my mother breastfed us all. Everybody did. And then came the advertising for formula – that formula was best. In the late 1940s, ’50s and ’60s the whole knowledge of breastfeeding stopped. In fact, the doctors were hardly able to say the word ‘breast’ – they had become so conservative.”

Caroline Higgins Byrne, of Friends of Breastfeeding, spoke of her gratitude to the wife of President Michael D Higgins, who has used her role to support breastfeeding in the public eye. “She has each year to date held an annual latch on event at Áras an Uachtarain for many breastfeeding volunteers and group charity organisations to attend with their babies and toddlers to launch National Breastfeeding Week. For those of us who have had the pleasure of attending, it has been an incredibly joyous day, in celebration of breastfeeding.”

Jen Hogan, who writes for The Irish Times, was named Journalist of the Year 2018. She spoke about how much it meant to her to receive the award. “Breastfeeding has been fabulous for me as a mum and being a journalist it’s a perk of the job that I get to write about it and hopefully normalise it a bit more.” Last month, she wrote about the pressure to stop breastfeeding.

In Canada last week, while the health minister was being grilled in the House of Commons over the country’s plans to legalise recreational marijuana by mid-October, it was the scene playing out behind Ginette Petitpas Taylor that catapulted the moment into headlines. One row over, during a raucous debate, Liberal MP Karina Gould was breastfeeding her three-month-old son.

And the winner is... Yes, it’s time for the prestigious Car of the Year award
3