Remember Octomom? She and her 14 kids are doing well

Are We There Yet? Natalie Suleman is a single mother to the longest ever surviving octuplets (and six other kids). The struggle is real 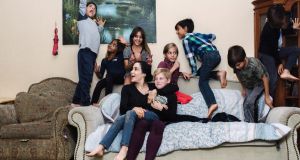 Kate Middleton has been talking this week about how everyone struggles with parenting. “It’s so hard. You get a lot of support with the baby as a mother, particularly in the early days, but after the age of one it falls away,” she told volunteers at the launch of a family charity. “After that there isn’t a huge amount... Everybody experiences the same struggle.”

It’s all relative, though, isn’t it? While parenting is never plain-sailing, I think it would be fair to imagine Middleton’s struggles with her three children have been alleviated somewhat by battalions of round-the-clock nannies and domestic servants, not to mention pots and pots of royal money. Natalie - also known as Nadya - Suleman, on the other hand, got into the Guinness Book of Records for her unique and epic brand of parental struggle.

You may remember Suleman, who earned the tabloid nickname 'Octomom' - a cartoon persona she at first played up to but has since rejected as “fake”. She’s in the record books for having given birth to the longest ever surviving octuplets. The children turn 10 on Saturday, and in the photographs they look happy and healthy. I should mention she has six other kids. Her eldest is 16.

Suleman (43) was pregnant with her eight back when I was pregnant with my twins. The only comment I got more around that time, even more than the ubiquitous “Oh, you’ll have your hands full” was the oft-repeated “at least you’re not Octomom”.

Suleman, who grew up as an only child, which fed her craving for a big family, had been controversially implanted with 12 embryos by a fertility specialist. She had been unable to conceive naturally and her six other children were also conceived through IVF. Though it seems hard to believe, Suleman has insisted that all the children came from the same donor and she didn’t know she was having so many babies. She says she wanted twins.

Each of her children – six boys and two girls – has a biblical first name and she gave all of them the middle name Angel.

At first, single mother Suleman embraced all the tabloid attention. She got involved with the adult film industry, was accused of child neglect, turned to drink and drugs, went to rehab and returned to raise her family, gradually fading from the news headlines.

A recent report in the New York Times with the headline “The Octomom has proved us all wrong’” describes a hectic but homely set-up where the children all go to bed at 8.30pm, do their homework without any hassle, help cook meals and are all vegan.

“They’re the only surviving eight octuplets in the history of mankind,” Suleman proudly told the reporter.“I’ve raised them to be wide awake.”

She says they are an open family and that they talk about everything, including her past mistakes such as a sex tape and drug use:

“They know; they went through it with me. It’s a huge weight lifted off of all of them when I went back to who I was. We were struggling financially, but it was such a blessing to be able to be free from that. Those were chains.”

Apparently she wants to write a book about her experiences. I hope she does and I hope it makes lots of money for Suleman and her huge family in California.

And well done, Nadya Suleman: when it comes to parenting, your struggle is real.

Some things to do with children this weekend ...

Hugh Lane Kids Club Sunday Sketching
Sunday Sketching kids workshops take place in the Hugh Lane gallery in Dublin on Sunday afternoons. During these workshops the kids’ activities include exploring paintings, sculpture and some of the architectural features of Charlemont House through discussion and drawing. 3-4pm, hughlane.ie

The Ark – TradFest Children’s Hub
As TradFest continues, there is a jam-packed programme of traditional music and craft activities, with concerts, workshops and sessions for schools and families. The programme includes traditional gigs for children, bodhrán workshops and open trad sessions. Friday-Sunday, January 25th-27th, The Ark, Temple Bar, Dublin, ark.ie

Inscriptions of an Immense Theatre Workshop
This workshop for all ages will explore the current exhibition at Temple Bar Gallery, Inscriptions of an Immense Theatre, by Ailbhe Ní Bhriain. Questions to be explored include “What is the meaning of a museum?” and “Why do they collect what they do?” Participants will dream up new hybrid objects to keep in museums, using drawing, collage and 3D modelling to bring these strange new things to life. Saturday, January 26th, 3pm, Temple Bar Gallery. templebargallery.com