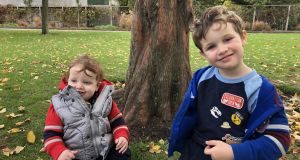 Allowing myself to be a kid again is one of the great joys of being a parent. Guilt-free 99 cones by the sea, making sharp-nosed paper planes (albeit with the help of a YouTube video) and stringing up conkers and making holes in them (and then realising you’ve handed your kid a mini wrecking-ball).

Lately, I quivered with glee when I stumbled on classic kids shows in my TV streaming service. The next day I rave about my great discovery to my preschooler and we snuggle up to watch Tom and Jerry.

A couple of minutes in and it all seems a bit weird. My child charitably sits waiting for it to be funny. When the second episode opens with a graphically suicidal, brokenhearted Tom, I quickly turn it off mid-show. My boy doesn’t object (and he always does).

I held high hopes for the 1984 episodes of Thomas and Friends, with its simple railway models narrated by the soothing voice of Beatle Ringo Starr. I left my pre-schooler engrossed and snuck out of the room to enjoy a guilt-free cup of coffee.

I return to an episode called the Sad Story of Henry. It’s about an engine who refused to come out of a tunnel because the rain would ruin his paint. So, Ringo explains, they took away his rails and built a wall. “Henry couldn’t get out of the tunnel any more” . . . “I think he deserved his punishment don’t you?”, he piped before the chirpy credit music rolls and the episode ends. I was left numb. The golden rule of young kids’ television smashed – the ending is always happy.

My attempts at introducing literature of my infancy was similarly dismal. I expected the classic fairy stories to be a bit sexist but planned to counter this by adding the words intelligent or funny, every time a princess was described as beautiful. Again, Mammy made the mistake of building up the stories as her favourite childhood books.

My patient boy smiled his way through bizarre plot details I seem to have erased from my memory: Chicken Licken and all his friends getting eaten by the fox, Puss in Boots and his master getting rich and tricking a princess into marriage by lying to the king and killing an ogre, Rapunzel’s mother being forced to give her baby away because she stole from the witch’s salad garden, not to mention countless dead parents and evil stepmothers.

As for singing nursery rhymes . . . well we’ve got 24 blackbirds being cooked in a pie, escaping (obviously not a very well-prepared dish) and getting revenge on the maid by pecking off her nose and the farmer’s wife who cuts off the tails of the three blind mice with a carving knife (where to start).

It all left me feeling glum. My nostalgia bubble burst. But there were no tears from my three-year-old, who didn’t even seem to register the horror but insisted we finish the whole fairytale set of books.

Perhaps it’s me who is is an overanxious Generation Snowflake parent trying to protect my children from the harsh realities of the world. I don’t want them to worry about death and punishment and poverty and greed.

And yet there’s something that makes me reach for the past. A saccharine sweet unreality in much of young children’s culture that makes the supposed use of Barney the Dinosaur theme for torture unsurprising.

The wicked and often dark sense of humour that made Roald Dahl my childhood hero still stands the test of time. And thankfully, my oldest has chosen a 1980s’ punk song over the mind-numbing viral hit Baby Shark as his favourite, on repeat.

As we jump around our kitchen to the staccato beat of Nelly the Elephant by Toy Dolls, not even a modern-day reminder of the twittering president can spoil the pure happiness as we shout “off she went with a trumpety trump trump trump trump”.