Post-stroke fatigue, November the month for remembrance and autism support 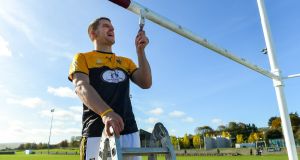 Tipperary v Kilkenny: The Legends Return, Saturday, November 3rd, 6pm in Borrisoleigh, Co Tipperary. In aid of Amanda Stapleton, who has been diagnosed with terminal brain cancer. Eoin Murphy (above) will line-out along with former Kilkenny stars, including Henry Shefflin and Tommy Walsh. Home side includeS Brendan Cummins, Lar Corbett and Eoin Kelly. Tickets €20 (in Centra or Tickets.ie). Under-16s free.

1) Coping with post-stroke Chronic Fatigue Syndrome (CFS), returning to work after a stroke and a new mobile app for CFS sufferers will all be discussed at Workbench in Bank of Ireland, Block 1, Blanchardstown Corporate Park, Dublin 15 on Tuesday, October 30th, 3pm-5pm. The event is organised as part of the campaign of the World Stroke Organisation for stroke survivors and caregivers. Tickets on eventbrite.com. The event will be livestreamed on the Life-after-stroke Facebook group #UpAgainAfterStroke.

2) November is traditionally a time to remember those in our lives who have died. The Irish Hospice Foundation will host its annual evening of remembrance on Thursday, November 1st, 5.30pm-8pm, in the Alex Hotel, 41-47 Fenian St (off Merrion Square), Dublin 2. Psychologist Niamh Fitzpatrick will talk on the topic of, Living with Loss: observations on grief from the inside out. Fitzpatrick’s sister Capt Dara Fitzpatrick died when the Rescue 116 helicopter crashed off the coast of Mayo in March, 2017. Three other Irish Coast Guard crew also died in the crash at Blackrock Island. During the evening, there will be videos and an opportunity to find out about bereavement support services in Dublin. Admission is free and all are welcome.

3) AsIAm, the autism advocacy charity, has called for a national strategy to end the widespread exclusion of autistic people from employment, access to public services and participation in society. About one in 65 people in Ireland is autistic. “We all want our children to invite the child who is a little bit different to their birthday party. We must extend that laudable instinct into the adult world too. Adults with autism must no longer be unnecessarily excluded from mainstream social participation,” says Adam Harris, chief executive of AsIAm. Up to 80 per cent of people on the autism spectrum are underemployed or unemployed, or are struggling to hold down full-time work because of a lack of understanding and supports within their workplaces, according to the autism advocacy organisation. Harris adds that hundreds of pupils at primary and secondary level schools are without adequate strategies for their educational and personal development. Supervalu has recently worked with AsIAm to make Clonakilty, Co Cork Ireland’s first autism-friendly town.

4) The Health Information Quality Authority (Hiqa) has launched its draft corporate plan for 2019-2021 and is seeking public views on the future direction of the organisation. The role of Hiqa is to improve health and social care services in Ireland through the development of standards and inspections of facilities. The draft Corporate Plan 2019-2021 is at hiqa.ie. To take part in the consultation, you must complete the short online survey by 5pm on Friday, November 23rd. Hard copies of the survey are also available. Email: corporateplan@hiqa.ie or tel: 01- 8286720.

5) The annual runs organised by Brain Tumour Ireland will be held in Corkagh Park, Clondalkin, Dublin on Sunday, November 4 at 11am. There are 5km and 10km timed options, a  5km family run/walk and a children's race.  See braintumourireland.com for registration details.