Smoke from e-cigarettes ‘damages DNA and can increase cancer risk’ 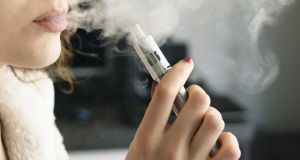 Smoke from e-cigarettes damages DNA and can increase the risk of cancer and heart disease, according to new research.

The battery-driven devices, which deliver an instant nicotine “hit” without burning tobacco, have been widely promoted as a safer alternative to cigarettes. But findings from an American study suggest they are far from harmless, and could pose a serious health risk.

In laboratory tests, mice exposed to e-cigarette smoke had higher levels of DNA damage in the heart, lungs and bladder than those breathing normal filtered air.

DNA repair systems, which protect against cancer, were also impaired in the animals’ cells.

The US team led by Dr Moon-shong Tang, from New York University School of Medicine, warn that “vapers” may be increasing their risk of life-threatening conditions.

Reporting their findings in the journal Proceedings of the National Academy of Sciences, the researchers wrote: “We propose that ECS (e-cigarette smoke) is carcinogenic and that e-cig smokers have a higher risk than non-smokers to develop lung and bladder cancer and heart diseases.”

Similar results were seen when cultured human lung and bladder cells were exposed to nicotine and nicotine derivatives. The cells were more likely to mutate or undergo tumour-triggering changes than non-exposed cells.

While tobacco smoke contains a host of potentially dangerous chemicals, e-cigarette vapour consists only of nicotine and some relatively harmless organic solvents.

Recent studies have shown that e-cigarette smokers have 97 per cent less of a lung carcinogen known as NNAL in their bodies than tobacco smokers. That is similar to the level seen in people on nicotine-replacement therapy. However, NNAL levels are still significantly higher in e-cigarette smokers than non-smokers, the authors of the new study point out.

They pointed out that e-cigarettes were rapidly gaining popularity, especially among young people who regard them as harmless.

“It is important to note that many of these e-cig smokers (who) have taken up the e-cig smoking habit are not necessarily doing it for the purpose of quitting TS (tobacco smoking), rather, it is because they are assuming that e-cig smoking is safe,” the scientists wrote.

Most inhaled nicotine is quickly broken down into a non-toxic chemical called cotinine, which is eventually excreted in urine.

But a small proportion, less than 10 per cent, is believed to be metabolised into nitrosamines and their derivatives, which include NNAL.

These chemicals are capable of inducing tumours in different organs, the scientists pointed out. – PA