My son is binge-eating in the middle of the night 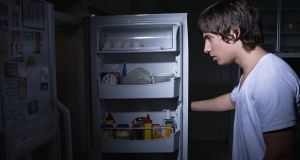 Q My son is 18 years old and for the Past two years he has been eating during the night. I write this to you at 3.15am after confronting him in the kitchen, once again. I regularly come down to the kitchen in the morning to find that food for that day has been eaten during the night. My son is not overweight, nor does he engage in regular sport. He can suffer from stress and anxiety. Meal times are regular and eaten at the table, however he stores sweet food in his room and I just find the wrappers.

I enjoy baking and I have a sweet tooth. I am very concerned about his relationship with food, but he is having difficulty facing this problem. He will not listen to me when I ask him to switch off social media late at night and this does not help with his eating habits. I have read about Night-time Eating Disorder and feel he may be suffering from this. I really do not know where to turn and he is in denial about the issue. Any advice would be much appreciated on how I can support him to change this pattern.

A There are a number of patterns of night-time eating that can cause a varying degree of problems depending on the frequency and the amount of food consumed. Night eating syndrome (NES) is characterised by a delayed circadian rhythm or distortion to the normal “body clock” which causes the individual getting into a habit of becoming hungry and eating during the night instead of in the morning or during the day. Frequently, the eating habit is associated with falling asleep – when the individual wakes at night they become dependent on the habit of eating in order to get them back to sleep. People with night eating syndrome, may not eat excessively and just consume their normal daily calorie intake, albeit during the night. However, frequently it can be associated with “binge eating” whereby excessive food is consumed in an addictive way and can be related to stress, depression and poor self-esteem.

In the case of NES, the individual is awake and aware of their eating (which seems to be the case for your son) but for some the eating occurs while they are still asleep or when they are in a state of sleepwalking. This problem is known as “sleep eating” or as a nocturnal sleep-related eating disorder, and this can be harder to change, as in the morning the individual may have no recollection of eating.

Helping your son In thinking how to help your son, the first thing to consider how serious the problem is for him. Given that he is not putting on weight, it could be that he is not bingeing or eating excessively, which means the goal might be to simply change his habit of nocturnal eating. Alternatively, he could be binge eating and/ or eating addictively at night and then he might support understanding his relationship with the food and the emotions behind his behaviours so he can make better choices for himself.

The fact that your son is aged 18 is significant. He is now an adult and there is only so much you can do as a parent to help him change or to address problems. While you can be influential as a caring parent, he has to make his own decisions. He has to first decide that his night time eating is a problem and then decide to try and change it.  You can only invite him to do this, he has to decide it for himself.

Influencing your son The best way to influence your son is to convince him that you only have his best interest at heart as you open up a conversation with him about his night-time eating. Picking a good time to talk is important and this is usually best done away from a conflict and certainly not in the middle of the night after a confrontation. Pick a time during the day when you are getting on better and ask permission to discuss the subject: “can we talk about what happened last night?” Before raising your own concerns, try to get a sense of how he feels – “I’m wondering what you think about your habit of eating at night?” He may be unsure about it or feel addicted and compelled to do it. Give him a chance to express these thoughts and feelings. If he accepts that there is a problem, explore what steps he wants to take to over come it. If he denies it is a problem, express your concerns in a caring way and then give him space to consider these thoughts and feelings. Keep the channels of communication open and be available to talk again and to offer support when he is ready. If it is hard to talk to him yourself, see if he will talk to his other parent or to another family member who might be in a better position to support him.

Changing the habit There are lots of things that your son can do to address the problem. For example, he can take steps to build a better routine around sleep and eating, for example by going to bed a bit earlier preceded by a relaxing routine and also gradually changing his eating habits to include more food during the day. If his night time eating is addictive, he can work on understanding his impulses and develop strategies to distract himself or do something else when he feels them. He could consider attending a therapist to help him, and Cognitive Behavioural Therapy (CBT) has been proven to help with binge eating and sleep problems. CBT would focus on helping your son identify and challenge the thinking that underpins his eating while establishing new habits and more constructive behaviours in response. There are also a number of self-help groups that he might find useful such as Overeaters Anonymous, as well as lots of useful resources online.

Dr John Sharry is a social worker and psychotherapist and co-developer of the Parents Plus Programmes. His new book ‘Bringing up happy confident children’ is now available.  See solutiontalk.ie.