Steam of anxiety over racism fuels train trip in Italy 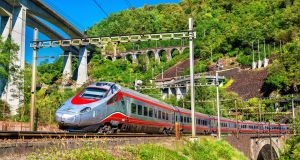 Delayed response: “I decided to wait until we got off at Genoa, stroll up to Mr Git, and ask him what he meant by his remark”

Odd how prejudice can take you unawares when you’re not used to it.We had sat in the wrong carriage on the train to Genoa – the reasons are boring but they have to do with the seat numbering starting at 11 rather than one.

At the next station two couples with English accents got on and made a beeline for the seats we were in. As we got up and explained why we had sat there, one of the men, a smarmy, bland-faced chap said, incoherently, “Judging by your accent, the ones down that end of the carriage are all sober.”

The other man explained politely where we might find our seats in the next carriage and we moved off. When we got to our proper seats, the remark began to circulate in my head. Mister smarmy git had delivered a muddled, racist slur. Whether it was intended as such or whether he saw it as an example of his quick and polished wit, I don’t know.

Why hadn’t I said anything to him then and there? Was it cowardice or was it because the slur came without warning and I had never experienced this before? I told myself it was the latter.

Should I go back and ask him what he meant? I supposed I should but I didn’t want a scene on a train and no doubt he would take it as evidence of some other prejudice about the Irish – such as that we’re always up for a fight.

I felt anger at Mr Git, but also at myself for not having been quick enough off the mark to put him down with a cutting response

Besides, a pregnant and very nervous woman wearing a hospital wristband was now sitting between me and the corridor. She had come from Florence by way of Pisa, was on her second train, didn’t know how far we were from Genoa and was stressing about missing her station.  It seemed she was unable to read and it became my job to tell her the name of each station at which the train stopped.

What I would do, I decided, was to wait until we got off at Genoa, stroll up to Mr Git, say how sorry I was to have taken his seat and ask him what he meant by his remark. Then, we would have a full and frank discussion.

I reflected on how out of date (hopefully) his attitude was. Just as out of date as a racial slur in an episode of Poirot the night before, in which an English landlady had described her Italian staff as “Eyeties” with the implication that they – one of the most energetic nationalities in the world – were lazy and needed constant whipping into line. This was broadcast in English on Italian television – I wonder if any Italians were watching and if they caught the reference?

Then, in the way the mind wanders, I thought about Brexit and wondered if it’s psychologically challenging for a nation which had an empire on which the sun never set to stay a member of a club in which its vote is equal to that of the Irish, the Italians and all the rest?

Mostly, I felt anger at Mr Git, but also at myself for not having been quick enough off the mark to put him down with a cutting response. I wonder if people who go through this sort of thing often (not only other races and ethnicities but many women also) have this constant experience of other-directed and self-directed anger?

Is that why people who rise up against discrimination sometimes go to extremes, fuelled by an anger that boils over and takes over?

The train pulled into the first station in Genoa and the anxious woman got off.  Ten minutes later or so we were in the main station. I waited for Mr Git to disembark. Unfortunately – or fortunately – he had got off at an earlier station.

I’ll know what to say next time but at this rate next time could take over half a century to arrive, and I won’t be on this train anymore.

Should have spoken up when I had the chance.

Pádraig O’Morain (pomorain@yahoo.com) is accredited by the Irish Association for Counselling and Psychotherapy. His latest book is Mindfulness for Worriers. His daily mindfulness reminder is free by email. Twitter: @PadraigOMorain