Hitting the wall: forming a fitness habit isn't so easy

It turns out that while I’m working out about five times a week and eating a mostly healthy diet, my body has reached a bit of a plateau 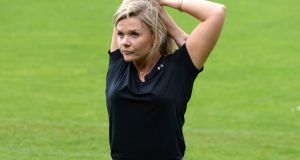 On your marks: Dominique McMullen gets ready to run for a chicken fillet roll. Photograph: Cyril Byrne

I’ve reached a bit of stagnation. While little muscles are bubbling under my skin’s surface, I’m having difficulty coaxing them all the way out. I’m worried that perhaps I started a little too early, as the siren call of cake, burritos and ice-cream is only getting stronger as the weather improves (it’s so much harder to swap the gym for post-work gin & tonics when it’s warm) and the big day is still five weeks away. This must be the most challenging part of working out, the simple act of just constantly doing it; again and again and again and again. Especially when it’s no longer new and shiny.

Research shows it takes 21 days to form a new habit. I’ve been doing this for nearly 50 days now, but it still doesn’t feel like much of a habit. Habits are things like picking at your nails or having a snack bar (sigh, snack bars) with your afternoon tea, not getting up at 5.30am to go the gym before work. Habits are lovely things like having a glass of wine on a Friday, not things you spend all day thinking of ways to get out of.

Someone asked me yesterday if I “loved it yet” and the real answer? Not particularly. Honestly, I’m a bit tired. And when temperatures are in the 20s, there is very little I would rather be doing than further exerting my sweaty, red body. Yes, there are moments when working out feels awesome. I’m not denying that. And if you could package and sell those post-gym endorphins, you’d be a millionaire. But the pre-gym fear is just as powerful. And no one seems to talk about that. Those who follow me on Instagram will know how many times I have sat in my car outside the gym, talking into my phone, delaying until the very last second when I have to go in. And I’m not sure if that will ever stop.

Despite not being scheduled to, I worked out on my days off and I did enjoy that smug post-workout glow. Having started at 15kg, I am now squatting 27.5kg, which made me feel a bit like the Hulk (on a quick Google, I can inform you that it is the same as the world’s heaviest cauliflower or six average size cats. Not too shabby, eh?) But I’m still not sure any of that was out of habit.

It turns out that while I’m working out about five times a week, and eating a mostly healthy diet, my body has reached a bit of a plateau as it gets used to the changes. John Belton warned me that this might happen. To continue to progress at the speed I was, would have been unusual. The body slows our metabolic rate as we change our diet, and as we age. Both of which I am currently doing. Last time I was measured my weight remained the same. But, I had also lost 8 per cent of my body fat. That’s a huge amount to lose, and I know that, but years of Weight Watchers-style pound-bashing has me twitching to see the scales go down. It’s been hard to convince myself that I’ve lost pounds of fat, which have been replaced by pounds of muscle. It can feel like the cards are stacked against you.

Healthy restaurants such as Chopped and Sprout provide great options for lunch, but for those two cafes there are 25 chicken fillet roll and a bag of crisps options. Don’t get me wrong, there’s nothing that wrong with a chicken fillet roll, but some variety would make my life a lot easier. Yes, I can make my own lunches, and often do, but my willpower would be given a significant leg up if the omnipresent white bread and Star Bars were a little further removed. The culture created around food in Ireland can make it hard to eat well. Bad day? Here’s a treat. Great day? Celebrate with a glass of wine. Home to see the folks? Apple crumble.

One of my worries, as the wedding moves ever closer, is how I will manage to keep some semblance of my current routine in the aftermath. I have a vision of a fridge full of take out and gym gear quietly growing mould in the back of the cupboard. I’m going to be measured again next week, and am hoping to find some inspiration before that to keep me on track.

But will I ever get to where I think, “that was a great day, I’m going to celebrate with squats”? Right now, I’m not so sure.