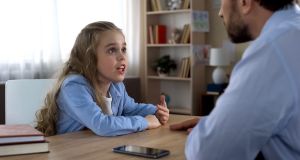 In the same family, parents are usually different in how they respond to and discipline their children.

This feels like a delicate question. We have two girls, aged six and eight. Our eldest can be a bit fiery, but you can talk her around most times.

The problem I have is that my husband often gets locked into a battle with her and inflames the situation. Sometimes, it feels like I have an extra child and I am managing both their tempers. When I get involved, they both seem to end up shouting at me and if I don’t get involved the row seems to go on and on.

When I try to talk to my husband later about it when the kids are in bed, we end up a row about it, with him saying that he does not feel I support him with our daughter. I just can’t see why he can’t deal with things in a better way.

Apart from this, he is a great, fun dad, and the girls adore him – it is just these rows are becoming so wearing and I am worried as to how they are affecting the eldest.

I work part-time and he works full-time, so I end up doing most of the parenting.

In the same family, parents are usually different in how they respond to and discipline their children. One parent may be more fiery and reactive than the other who might be generally calmer in how they respond. It is common for one parent to be more easily wound up by one child and sometimes this is because they share the same personality. As you describe in your situation, it is easy to get drawn into the rows between your husband and your daughter and as you say this can lead to an even bigger row with them “both shouting at you”.

It is worth taking a pause to think through what might be happening. Part of the reason that things might be escalating when you get involved is that you are seen as a referee in their dispute, they are fighting for you to take their side in the row.

It is understandable that you might feel critical of your husband’s reaction – his temper is probably making things worse. However, it is important to try not to be critical of him in front of your daughter which is likely to undermine his authority. Instead, talk to him later to resolve things. If you do intervene during the heat of a big row, the goal is try to de-escalate the emotions so as to calm things down. Keeping calm yourself, and trying to act a little more like a mediator rather than a referee between them might be a better approach. For example, you might calm things down by communicating things between them – “your dad, just needs you to tidy up your stuff”, and “I think she might need a bit more time to do it” or “let’s talk about sorting this out later”.

Talking things through with your husband

To resolve the problem, it is important to talk through the situation with your husband later to help him find a better way to manage the rows with his daughter. This is a difficult conversation to get right – it is easy to become over-critical and for him to become defensive and then to make no progress. Here are some ideas that might help.

Start the conversation in a positive manner, either over a cup of tea or when you are out for a walk together. Talk first about what is going well and all the positives in his parenting. Recall something positive he has done with the kids and talk about this first.

Try to be understanding

Try to be empathic to how your husband might feel “I know she can wind you up” or you can lighten the discussion “the two of you seem to share that same fiery temper”. Listen to his side of the story and what he wants to happen. Help him understand his daughter’s feelings too “when you react that way it is like a red flag to a bull/she hates being rushed etc” as well as your feelings – “I really find it hard when tempers get raised like that.”

Explore with him what is the best way to respond to your daughter in these situations. Brainstorm solutions and what might work for him. At this point you can discuss what way you approach things and what works for you. Remember though that parents can be quite different in how they respond and what works best for him may be different to you (eg some parents use humour or distraction to diffuse difficult situations and other use “feeling talk”.) Ask him how you can help, and try to reach an agreement as to how you will respond in the heat of the moment when a row starts – this could be that you back off and let him resolve it or you step in to support.

Support his relationship with your daughter

Take time together as a couple

Remember the dispute will be more easily resolved, the better you and your husband are getting on. In the stress of parenting together, many couples stop attending to their own relationship which then aggravates the differences and conflicts between them. The more you can prioritise having quality time together as a couple the easier it will be to talk problems through. Set aside enjoyable times together during this week, whether this is getting out for a meal, going for a regular walk, watching a favourite TV series or even doing house projects together etc. Try to make sure you have a daily chatting time each evening when the children are in bed when you can debrief together from the days stresses.

John Sharry is founder of the Parents Plus charity and an adjunct professor at the UCD School of Psychology. He will be delivering Positive Parenting workshops in Dublin on March 7th, 8th and 28th. See solutiontalk.ie for details.