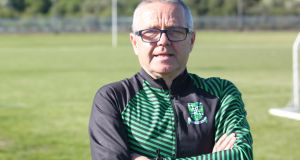 Peter Gunning: ‘Get out of my way sickies. I do not need an infection.’

I went to a Brian Kennedy concert recently in the The Grainstore in Ballymaloe House. (He was great by the way, I particularly liked his Van Morrison covers).

In between songs he told us his cancer story not realising that, for some of us in the audience, this was counselling. At one point he mentioned that a friend had told him that once you hit the 50 mark, there is always a sniper on the roof.

With immediate Cork wit, a voice from the back row roared: “When you hit the 60 there are two feckin’ snipers!”

The heckler had been reading my mail.

I was diagnosed with Non-Hodgkin Lymphoma three years ago and then last June two days after my 60th birthday the second sniper struck when I suffered a stroke.

My treatment plan for the lymphoma was “wait and see”. Thankfully, with active surveillance, there was little to see and the waiting allowed me to recover from my stroke. So fitted now with a pacemaker, there will be no more strokes. Sniper Number Two has left the roof.

However, Sniper Number One is still in the building. He’s just been hanging around, watching his lymphomas grow. And grow they certainly did.

All that waiting around have nurtured them from infancy to that difficult adolescent stage. When I was first diagnosed, my oncologist Dr Bird explained that he uses cat metaphors to describe lymphoma. What I had was no kitten but certainly not a tiger. He described mine as a wild mountain cat. Now apparently it is time to trim its claws or preferably neuter it.

In the last paragraph I used the term “my oncologist”. Using a first person personal pronoun before the word oncologist is something I would prefer not to have done. Much and all as I like and admire Dr Bird, I wish he was not mine. However my “mys” continue to happen as easily as my snipers find foot on the roof. Now I can add to my list of medical personae, my neurologist, my cardiologist, my haematologist, my specialist cardiology nurse practitioner, and as of today, my cancer liaison nurse.

Today was my introduction to chemotherapy. It was an orientation day in cancer treatment in the Bon Secours Hospital in Cork. It reminded me of the time I was a school principal and we held induction days for the incoming junior infant pupils and their parents. The children would come to meet their new teachers and visit their new classrooms, while earlier moms and dads would hear me talk proudly of our school ethos and policies.

Today my new teacher took me by the hand and brought me to my new room where my new education will begin in two weeks’ time.

Mairéad, my cancer liaison nurse, will possibly become the most important hand I will hold over the next six to eight months.

Today in a quiet room we sat and we talked. We talked about me and we talked about my cancer. At the risk of sounding precious, in our hour-and-a-half conversation, I felt somewhat special. Mairéad listens well. She speaks well too, underlining the relevant information with a reassurance and a confidence that made me feel safe.

She explained that I will receive two types of infused medication during my treatment. One is Rituximab which is a targeted therapy drug, the other is a chemotherapy drug called Bendamustine.

I will receive this treatment once a month over the next six to eight months. For the first cycle I will be an in-patient as my reaction to both drugs will be closely monitored. All going well with cycle one, future treatment cycles will be conducted as an out-patient in St Veronica’s ward in the recently built, ultra-modern hospital extension.

There will be the inevitable side effects that accompany most chemotherapy medications. Anti-sickness medication will probably keep the nausea and vomiting to a minimum. Mouth washes and oral medication will prevent mouth ulcers and not allow thrush or infections. I must take care not to get close up and personal with those who have coughs, colds or any contagions. Get out of my way sickies. I do not need an infection.

We spoke about hair loss. Not a vanity point here. A thirty seconds Gillette rub will fix that. It is okay Mairéad, an afro wig would look silly.

Then we went to St Veronica’ s ward. People drank teas and coffees with chemotherapy drips dripping inconspicuously. There was an atmosphere of quiet serenity. Very soon I will be part of this, hooked up to my Rituximab/Bedamustine cocktail for Operation Wild Mountain Cat.

Later I met my wife, Gerri. and I held her hand as we walked down Patrick Street. She wanted to buy me a dressing gown. I told her that hers was the most important hand that I will be holding over the next six to eight months. Liar.

Oh my mama told me. There’ll be days like this.