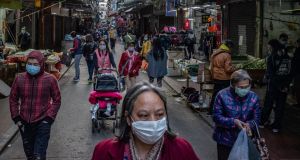 My young son wakes with weird spots on his face and complaining that his throat feels as if there’s something stuck in it. I know perfectly well this isn’t the killer virus from China as I pick up the phone to book the first appointment I can get. Still, ever since a trip to the park ended in a rush to A&E with him covered in vomit and gasping for breath in my arms, I am beyond paranoid. I have managed to pass on a history of asthma and anaphylactic shock. So I’m not particularly comforted to read that deaths in China from coronavirus have thus far only been of those with underlying health conditions.

As my grandmother told me once, “You don’t know what fear is until you have children.”

When she was little, her eldest sister died very suddenly of influenza at the age of just 18. My gran said she didn’t remember much about it as she was so young, but her parents never got over the shock and devastating grief. My great-grandmother had been the district nurse for Guinness’s in the tenements of Dublin and a wonderful healer, but she was powerless to save her own daughter. This tragedy was to haunt her for the rest of her life.

It’s incredible to think that Spanish flu after the first World War killed an estimated 23,000 people in Ireland and up to 100 million worldwide. My gran explained to me that it hit the young harder than the old. This may have been partly due to immune systems compromised by the poverty and malnutrition that followed in the wake of so much violence. Though there has always been a certain mystery as to why some survive whilst others succumb to viruses that can mutate and attack with startling speed.

My grandmother lived independently in her own house in Stillorgan until the age of 91. She never complained about being sick but the last time I spoke to her she said she’d a bit of a cough that wouldn’t go away. Then the day before I was due to go to China, she was rushed to hospital.

I convinced myself my gran wouldn’t want me to miss the trip. She’d always loved to hear tales of my travels and took a keen interest in what was happening in the modern world. She was as sharp as a pin and still dressed with all the careful elegance of the designer she’d once been.

When I arrived in Guangzhou, my translator told me she came from Wuhan. Never having heard of it, I assumed it was a small provincial town, not a city the size of London. She said she worried about living a plane journey away from her elderly parents. She was their only child and as they had been only children themselves, she had no aunts or uncles or cousins to check up on them. It dawned on me how the one child policy meant that whole generations in China have no extended family.

I was there by invitation of the British Council to give a reading at the Pearl River International Poetry Festival. It was a very grand affair with rows of chairs set out on the lawn, red carpets and the most glamorous presenters I’d ever seen. What I enjoyed more though was the next day working with an older Chinese poet on translating our work. He explained that being a poet had been a very respected profession in China when the state used to offer a salary practically equivalent to a doctor’s or a lawyer’s. The only snag was you had to write what they wanted. He had chosen instead to write about the human rights situation in Tibet so had been unable to take up an official position. He told me this with a great laugh and a wink though it had clearly cost him dearly.

The afternoon before I flew home, my Chinese colleagues took me shopping to buy a present for my grandmother. They listened with such genuine kindness as I talked about how she had been the head of the costume department in RTÉ and had made so many beautiful clothes for me as a child. My translator helped me pick a small figure in a red traditional dress that was worn for good health and luck. I knew my gran would love it as she collected dolls from around the world and I couldn’t wait to give it to her.

In Amsterdam, as I waited for my connecting flight from Chengdu, my phone rang. It was my wife to say my grandmother had died that morning. I was so upset I thought of throwing away the doll. But then it occurred to me my gran would love the idea I’d been telling people all the way in China how wonderful she was. I still have this small figure in a red dress, and I hang it on our Christmas tree every year in memory of her.

I will never forget how deeply sympathetic my Chinese colleagues were when I told them my gran was ill. My translator explained to me how in China, there had traditionally been great respect for older people. Though this was changing in a society where grown up children often had to move great distances to find work. They were leaving behind elderly parents who were alone and vulnerable with little state support.

Remembering my translator’s anxiety, I now can’t help wondering how her parents are coping with the total shut down of public transport and the rush to empty supermarket shelves. Wuhan has apparently been turned into a ghost city with people afraid to leave their homes and protective masks made compulsory. The authorities have even shut the airport. But with the explosive growth in global travel, this may be a case of closing the stable door after the horse has bolted. There have been cases in Australia, France, Thailand, Japan, South Korea and the US, amongst others.

As I write this, my son is tucking into a bowl of apple crumble and the spots have nearly gone. I am so grateful for my good fortune but also aware that from the very young to the very old, all of us are vulnerable. Just because you’re paranoid doesn’t mean you shouldn’t do your best to care for those who may need that bit of extra support.

Aoife Mannix is the author of Hold On, Let Go: A Memoir of Loss and Hope, which will be published in the autumn

I’ve lived abroad for longer than in Ireland. Was I gone too long?
3

‘I wouldn’t be here without it’: The importance of exercise to teenagers
Real news has value SUBSCRIBE