Tanya Sweeney: As the Big Day loomed closer, could I not just enjoy being off the grid for a bit? 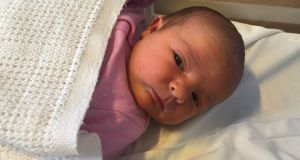 I filed my last big feature last week, as though I were falling over the finish line of a particularly gruelling, rain- lashed marathon. The hospital bag was packed, the baby clothes washed, the baby gym erected, the collapsible buggy finally demystified.

All that was left to do was to put the feet up, rest and wait for the Big Show.
Catch up on sleep and enjoy every second, because things are about to get wild. Savour each cup of tea to the last drop because you’re not likely to drink a full hot drink for years, is the general gist of others’ advice.

If only it were that easy.

I had visions of myself in the days before childbirth, guzzling Netflix until my eyeballs begged for clemency. I’d read luxuriantly, catch up on the BBC Four music documentaries (recorded months ago with the best of intentions), and use the dozen or so bath gift sets that all pregnant women accrue in their third trimester.

The other plan was to sit alone with myself and my thoughts for a few days. I used to be great at all of these things. I’ve long been a Cruiserweight champion when it comes to wasting huge chunks of time on vegetating without intent.

But last week, I experienced what I can only describe as a professional FOMO. I’m not used to not working when the rest of the world is going full pelt.

Every day felt a month long. The only other times in my life where I have sat in front of daytime TV during the week have not been easy ones: bereavement, depression, illness. I tried thwarting this with a few last-minute (and totally unnecessary) life admin projects: meeting with a financial planner to baby-proof my finances; sorting this year’s tax return early; buying birthday presents months in advance for friends.

Why couldn’t I just enjoy being off the grid for a while? Even more importantly, why couldn’t I see this isn’t a selfimposed holiday, and that I was rounding into a new, entirely different, but nonetheless legitimate kind of work?

Like many child-free people, the Old Me was always a little bit envious of new mothers getting to “enjoy” huge swathes of maternity leave. As though they were heading on a particularly soothing cruise or something. Some were able to take a good six months’ paid leave; the odd teacher pal might find herself out on leave (and on full pay) for a year, if her child was born at the right time of the academic year.

Money for jam, I thought.

Coo at a cute baby and watch Iggle Piggle for a year, I thought. I could certainly stand to get paid to do that.

How much harder can a baby be, I would reason to myself, than sourcing case studies, conducting difficult interviews, transcribing, writing to deadline. That we see caring for infants as some sort of idyll – an easy alternative to “real work” – hints at a huge cultural misconception, not to mention a personal prejudice I admit I’ve long harboured.

Well, now I’m here and I’m terrified; desperate to find a way back to my old comfort zone. Since I first stepped on to the local pub floor as a lounge girl, I’ve had a job for well over a quarter of a century. Much of my self-worth and self- identity is wrapped up in what I do for a living; maybe more than I care to admit.

The idea of putting that part of me in cold storage, even for just a short while, will take some getting used to.

Last week I oscillated wildly between thrilling anticipation at what’s coming next, and feeling strapped to the front of a runaway train. I veered between melancholia that for B and I, these could well be our final days à deux, and then a ticklish excitement at seeing him, babe in arms.

I still feel bafflement that the universe is somehow allowing me to become a parent. It feels as though I need to write a strongly worded letter to someone about this very obvious admin glitch.

Besides, I’ve been reliably informed that the maternity leave blues are nothing compared with the overwhelming feelings mums have about finally returning to work on the other side of their (ahem) “break”.