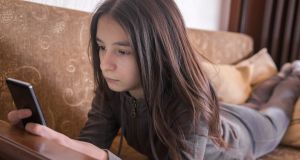 In the real world, many children would probably spend every waking moment on their mobile device if they could. Photograph: iStock/file

All of my 12-year-old daughter’s classmates have a smartphone. Every single one. Over the past month, the final few who weren’t already attached (physically and emotionally) to an iPhone or Samsung Galaxy or Google Pixel, or whatever, were handed a device that connects them with everything we hope to keep our children away from.

Not accidently, it coincided with the sacrament of Confirmation, which, of course, is about accepting responsibility for your faith and destiny. In Ireland, it is now often, apparently, celebrated by handing 12 and 13-year-olds a super-charged gateway to everything evil in the world. It has, at least in my part of the world, become one of the sacraments of initiation into adult world.

Everyone knows what the rules are – even if they are viewed as draconian.


A new rite of passage.

I have been having nightmares about it.

I don’t need to go into the dangers of a child having a mobile phone. It’s well documented.

I suspect, like many in the same situation, I know the question, but don’t know the answer.

How the hell do we keep our children safe in this new world?

An American study just last week found that most parents are worried that their children are addicted to their devices (and nearly half of teenagers had the same concern about their parents).

In the survey, more than 40 per cent of teenagers said they checked their phone a few times each hour, and one-third admitted to checking their phone in the middle of the night.

That should be a wake-up call for any parent.

Two-thirds of parents said they had family rules governing the use of mobile devices. In our house, there are many rules.

I know everything, Jon Snow.

After a few weeks of fighting over time spent on the phone, apps downloaded, websites visited, personal data entered into forms, etc, I hit on what, for me at least, is proving to be a workable solution. I downloaded an intrusive parenting app.

Invasive is an understatement. It controls and monitors my daughter’s smartphone. There are things I can do on her phone with my phone that I don’t know how to do on my own phone.

There are some parental controls already built into most phones nowadays, as well as services such as Google’s Family Link, but what I had in mind was even more interfering. Setting time-limits, web filtering, restricting apps, monitoring usage, message logging and location tracking.

It even has a panic button – for both of us.

Considering the phone was handed over only after a myriad of restrictions were already agreed to (no phones upstairs, at the dinner table, etc) these new conditions were not greeted with any happy emojis.

But, miraculously, the daily arguments about phone use have ceased – or, at least, significantly decreased. Instead of a seemingly never-ending argument over whether it was five or 50 minutes since she last looked at the device, phone use is set to restricted times and time limits. Everyone knows what the rules are – even if they are viewed as draconian.

Ever since the app was activated, the phone has spent more time asleep.


I would name and recommend the app, but it’s too early to tell if it is going to be a success, and I chose it after being bamboozled by all the products designed to spy and control other people’s phones. And, I did find some options that, even for me, were too intrusive – basically spyware stealthily hidden on another phone.

That was not the point – my daughter is fully aware of all the limitations on the device.

There is nothing hidden – on either side.

Hence the first conversation with a friend on the new phone was about how over-protective I am.

“Oh no, that’s awful” came the reply, accompanied by some emojis who also seemed unimpressed.

Creating balance is not an equal two-way street. Not in this house. In an ideal world, the parent sits down with the child, calmly explains their worries about too much time being spent looking at a screen, as well as the dangers that lie just a few clicks away. The child agrees and everyone is happy. But, in the real world, many children would probably spend every waking moment on their mobile device if they could.

Handing an unrestricted, unregulated, no-holds-barred mobile phone to a 12-year-old is a form of child abuse.

Ever since the app was activated, the phone has spent more time asleep.

And so have I.

Edit: Many readers have been asking for the name of the parenting app. Of course, it is up to parents to research which app best suits them, but the one I am currently using is called Qustodio.

Live beside the Edge in docklands penthouse for €1.7m
8