Children are not asking for the sun, moon and stars – they just need time 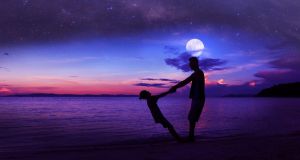 “Dad, how many planets have a moon?”

“No idea. Can you look it up somewhere?”

I did not know I was an absentee father until eight weeks ago.

For most of my working life, my long daily commute meant spending the majority of any weekday outside the home. So life since the middle of March, when work and school were unceremoniously transported to the kitchen table, has been radically altered, as it has been to various degrees and ways in many houses.

It’s doubtful my daughters consider more time with their dad a gift. Certainly not at 9am each day, when their presence at the kitchen table is mandatory – books open, ready to go. No excuses

The children may not have been in their schools in two months, but they have been in a classroom five days a week. The primary-school-goer recently complained to her teacher that she was doing more work now than before.

But that’s the way it has to be.

The traditional art of parenting is being able to look at children younger than your own and say, “Ah, sure they are no bother at that age.” In truth, however, with my wife working in retail and so out of the house every day, working from home is doable only because the youngest turned 10 a few weeks ago. So they all know the concept, at least, of “Right, everyone needs to quietly concentrate on their work now.”

It usually works for about five minutes at a time.

“Jupiter has 79.”
“What?”
“Moons. They’ve only gotten around to naming around 50. One is called Lo.”
“Good for Jupiter. Okay, silence now again for another while, please.”

I am not an absentee father. It was, perhaps, out of line to use such a description, considering many parents are facing real and serious difficulties spending time with their children – pandemic or no pandemic.

In this house, however, the children have never seen their father so much before. I’d be afraid to ask the young jury if that is a good thing or not, but there’s no doubt that, although they have been cruelly deprived of many things since the world retreated – particularly, in my opinion, playtime with friends and hugs from grandparents – they have been gifted more hours with their dad.

It’s doubtful they consider it a gift. Certainly not at 9am each day, when their presence at the kitchen table is mandatory – books open, ready to go. No excuses accepted.

“Dad, what’s our one called?”
“Our what?”
“Moon. What’s its name?”
“Never heard it called anything other than the moon.”
“That makes no sense.”

With three daughters, it has always been on our radar how important one-on-one time is. The youngest and I had established a Saturday-morning routine for the past year of going for a slow jog together – and, more importantly, a post-run debrief with pancakes at a local cafe. Precious quality time. With luck, she remembers it as fondly as her dad does. And, with luck, those days will return soon.

It was an oasis of calm in a crazy, regular routine that involved weekday evenings spent complaining about homework (parents and children), doing a dizzying array of sports activities, squeezing dinner in somewhere, and looking forward to bedtime – theirs and yours.

That seems such a long time ago, when there was always somewhere you needed to be, 10 minutes ago.

Time has shifted since lockdown began – giving back to some, cruelly taking from others. When you are on the receiving end of more of it, it’s your duty, surely, to use it wisely. We can kill it, save it, lose it and even race against it, but perhaps it’s most useful for parents when we waste it – as, with children, that is not really a waste at all.

This is not to say I actually like my kids all the time. Or want to spend all of my time with them. God, no.

In recent weeks I have started going for regular runs (let’s be generous and call them jogs) without the youngest. I don’t particularly like running, but I’ve been looking forward to these regular solo outings so much they have somehow evolved from once a week to twice a week to, lately, every second day – which, for me, is a miracle.

These days we cycle the town’s main roads every day – waving to everyone. Everyone waves back. Cars and trucks sit behind until it’s safe to pass; other cyclists salute as if they haven’t seen another bike user before

A few days ago I put on my runners and managed to reach the front door before I even noticed it was lashing rain. Normally, I wouldn’t have taken another step outside. But I listened to a row brewing behind me over a missing 7Up can, turned on my running app and gleefully took on the weather. No contest.

My children are going to make me fitter – if they don’t kill me first.

It is wonderful to be able to spend more time than normal with them: it helps self-worth (theirs too, apparently) and encourages communication (though, in a house where someone is always talking, this has never been a problem).

“We should think of a better name and tell everyone.”
“Are you still talking about the moon?”
“Yes.”
“Okay, let’s go for a quick cycle around the block, mull over some names for the moon and then get back to work. Agreed?”

One of the kids in particular has fallen in love with her bicycle again. It is a joy to bring them cycling at the moment. Some of the roads near our estate, in normal times, are busy, noisy, unfriendly places. The local primary and secondary schools are just a kilometre away, but we’ve never even considered allowing them to go on their own steam.

But these days we cycle the town’s main roads every day – waving to everyone. Everyone waves back. Cars and trucks sit behind until it’s safe to pass; other cyclists salute as if they haven’t seen another bike user before; pedestrians smile and nod.

No one has spoken rudely to the kids. Not once.

This doesn’t appear to be the norm. On social media there is plenty of evidence that many parents have experienced rude, uniformed idiots shouting at children, using words such as “vectors”.

Presumably, the sight of a gorilla (in looks, weight and hair, only some of which can be attributed to the lockdown) walking or cycling with my children probably discourages much in the way of negative comment. It’s probably likely that anyone who would shout at a child would be more inclined to do it in front of a mother rather than a father who hasn’t shaved in so long the children no longer need the internet to watch feeding time at the zoo.

So we are left to take our time on our travels, by foot or bike, with or without the dog, to the park or around the streets. Nothing to rush away from or to. Left to idly chat about the important stuff, such as how the ancient Greeks called the moon Selene.

So we’re going to call it that from now on.