Escaping from ‘Mammy Jail’ for a boozy night of music

For a few hours only, I revisited my old, pleasure-seeking life 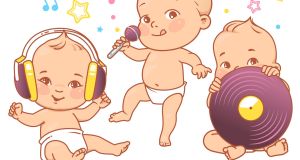 I was convinced my baby would know the lyrics to every Pixies song before she could say the alphabet, and then rebel against it all by professing to like the latest K-pop sensation. Photograph: iStock

I really must stop referring to my new life as “Mammy Jail”, but let’s be honest: being a parent can feel very removed (for which, read: cosseted) from one’s life of old.

Facebook’s memory function regularly retrieves pictures of me taken years ago, resulting in bittersweet, not entirely pleasant feelings. More often than not in these photos, I am done up like a neat grave, holding a drink that is likely to be joined by several other types of drinks that will cause me much bother the morning after.

In these photos, I’m at a gig, or a party, or a bar, or a festival, surrounded by friends every bit as extroverted and pleasure-seeking as I; the flash pulling us out of the dank light of the night and bathing us all in light and freedom and loudness and fun. Finding our tribes, chasing the night around town until we let it go from our grasp (or, in a more sensible moment, declaring defeat and leaping into a taxi). We were at it three or four nights a week, and why the hell not?

These days, a mad night constitutes a second episode of The Crown and getting into bed after 10pm

If feels a long time ago. These days, a mad night constitutes a second episode of The Crown and getting into bed after 10pm. But recently, there was reason to revisit my old life. My friend L had bought tickets to a band from Los Angeles that we’d first seen almost a decade ago. As their PR handler at the time was a friend of ours, I have a rather hazy memory of taking them to Whelan’s after their first Dublin gig and badgering the DJ to play their song as I thought they might like it (he assured me, rightly, that it would mortify them).

They were poured onto a tour bus last I recall of the night, headed for Wales. It was a glorious, sodden, chaotic shambles of a night.

And I was looking forward to what I thought might be, on the face of it, a nice visit to my old life. I didn’t expect the clash between it and my new one to feel so jarring.

Initially, my friends and I met for pre-music drinks. Though it had the air of a special occasion for me, my companions are still very much used to regular socialising. Ergo, they were were pacing themselves like grown-ups while I, on my first girly night out in some time, was drinking as though we were approaching the Prohibition era. “Ah, one of you can hold my hair back later on when I’m getting sick,” I joked.

They didn’t laugh. If anything, they looked a bit apprehensive.

Once inside the venue, I ordered drinks on the double, instructing the staff to lob the lot into a pint glass. “It’ll save me trying to get through the crowds later,” I assured my friends.

In many ways, I was home again. Yet instead of feeling free and nourished with something I love, I felt old and tired

I settled in under the lights, within the crowd. I thought about how this – being in the darkness of a music gig – had once felt more like home than anywhere. I truly loved being one within a heave of excited bodies, the anticipation of the event, the romance of hearing beautiful music loud. There has always been a sort of tribal feel to a live music gig, and it was the one place where I felt within my comfort zone. The exact moment where the house lights dim to darkness, right before a band or artist move onto the stage, is hands down my favourite thing in life. In many ways, I was home again. Yet instead of feeling free and nourished with something I love, I felt old and tired. How had I let music get so far from me in my new life?

Once, when Isola was tiny and crying inconsolably, I put on an album by Joanna Newsom – a Marmite artist at the best of times – to salve her. For a few moments, she listened attentively, before making her mind up and redoubling her efforts to screech the house down. Since then, the only music I’ve played around the baby is whatever saccharine gubbins passes for music on her toys. She did hear Mark Kozelek on an episode of Yo Gabba Gabba, but that’s as far as her music “education” has gone.

Oddly, as a dyed-in-the-wool music snob, I was always convinced that I would constantly play the songs I loved to my baby. I was convinced she would know the lyrics to every Pixies song before she could say the alphabet, and then rebel against it all by professing to like the latest K-pop sensation.

I’ve long made playlists for every other baby in my life . . . given how much I love music, how come I haven’t gotten off the blocks yet with my own? That night reminded me how much music fed and enlivened me. I must remember to share that with my daughter in years to come, if only so she knows more of who I am.

As I stood in the darkness of that one gig, memories of that fateful night in Whelan’s surfaced, then popped in the air like bubbles. And then, the singer spoke up. “If you know this next song, you’ll have been with us for a very, very, VERY long time,” he said. I smiled inwardly.

The music snob in me is still in there, somewhere.