In the children’s A&E every parent looked like us: wild-haired and exhausted

I’m prone to being a drama queen but asking the nurse ‘Are we doing to lose her?’ was a new low 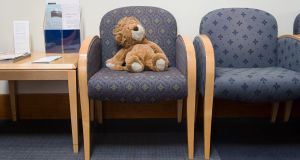 The waiting game is fraught with uncertainty and low-level panic. Photograph: iStock

They say that as a brand new mother, the best meal you will ever have is the tea and toast you are given right after labour (I mean, I could have killed for a Chinese, but I’m happy to go along with popular opinion here). By that reckoning, the worst meal you’ll ever get as a new parent is the exact same tea and toast, albeit dispensed in a children’s hospital.

It was Saturday morning, about 8am. Isola had been sick for a couple of days with a cough, blocked nose and general irritability. We were on a care plan involving humidifiers, baby Vicks, Olbas Oil baths, saline sprays, drops, plug-ins.

But then, she started to refuse her bottles and food.

Now, this girl loves her grub, so I knew we were coming up against a problem. By Saturday morning, after two sleepless nights, her lips were dry and she was groaning, half-lidded.

Were we putting her in danger?

Two rounds of frantic googling, and you really start to believe that you might be.

Most new parents spend many hours agonising and arguing the toss before they decide to bring a baby to the hospital.

How do these pesky digital thermometers even work? (Seriously, I could launch a spaceship quicker than I could use one of those things). B and I were panicked and stressed. Sleep deprived and scared. Neither of us do particularly well in these circumstances.

We arrived at the children’s hospital emergency department, where every parent looked just like us: half-dressed under heavy coats, wild-haired, exhausted. Some were still in their dressing gowns, possibly indicating an emergency dash. Some patients were there because of Saturday morning sports matches: a fractured arm here, a broken leg there. For others, the visits were clearly a regular occurrence: their parents appearing drained yet somehow stoic. This was part of the ongoing reality of their lives, and to see them handle this with such grace at close range is hugely humbling.

Which is a lot more than can be said about me, a first-timer. I’m prone to bouts of being a drama queen at the best of times, but even asking the first nurse I came across “Are we doing to lose her?” is a new level unlocked for me.

And yet, the waiting game is fraught with uncertainty and low-level panic. I have not yet toughened up to these parental vagaries. Some kindly nurse took pity on me, crying quietly with the sleeplessness and the panic, and took the baby for a walk around the ward. Having been crying solidly for the morning, Isola perked up considerably when she was lavished with attention by lots of new faces. This is part of the beauty of a children’s ward: doctors and nurses are, quite literally, running from bed to bed. No bed or cot is left empty for very long. Sick children line the walls, waiting for a bed. And yet, amid the busyness and the demonstrably heavy workload, each doctor and nurse has space for empathy and kindness. There is always time to blow bubbles at babies, or to order tea and toast for hysterical eejits like me.

For parents, hospitals are hellish, but oddly enough, I never did mind them much as a child. If you grew up in the house of a nurse, as I did, you will spend much of your childhood believing that nothing can ever really go wrong. On the downside, nurses can spot sickies from a mile off, even when you try that “heat the thermometer with a lamp” thing that you saw on ET. Hospital visits didn’t seem that bad: I remember getting my tonsils out in Harcourt Street hospital, where my mother worked. I got special treatment (specifically, a mix of Cornflakes and Weetabix, as was my wont at three years old). The rest of the time I spent flirting shamelessly with the two five-year-old boys on either side of me. The bad stuff, I don’t ever really recall. Just the flirting and the special breakfasts. I hope it’s this way for so many of the other children I saw that weekend.

In the end and after several hours, we were sent home with a diagnosis of bronchiolitis. We had to keep doing what we were doing with the sprays and the plug-ins, until the virus ran its course.

As we walked on to the street, B and I apologised in unison for being awful with each other earlier, then laughed at our impeccable timing.

And then, with a whole new perspective on things, it was back to the glorious humdrum of ordinary life for us, wishing badly that it could be so for every other parent.