Confinement and your kids: tips to turn negativity positive

Families are in this together – schedules, plans and honesty can keep scars at bay 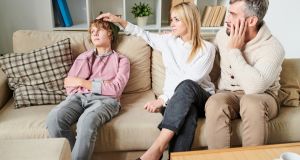 While children are very good adjusters, the new norm is temporary and the old norm will return and we will have to readjust children back.

Here are seven tips from experts on how to support children through the continuing crisis, in the hope that they will be able to look back on this as no more than a blip in their childhood, perhaps with even some life-affirming benefits, rather than a scarring ordeal.

1. Check in with your child

Don’t presume that just because you have got this far without any meltdown, your child isn’t struggling. Make sure you are giving them space to talk about what’s on their mind.

“Just because children are not saying it, does not mean they not worrying about it,” says Colman Noctor, a child and adolescent psychotherapist with St Patrick’s Mental Health Services. “Often they won’t want to burden adults who look stressed themselves.”

The are many families who don’t know if their business is going to reopen or they will have jobs to go back to, he points out, “and children can hold on to their worries and questions. If you can have a space to talk about that and encourage them to talk about it, they are less likely to adjust to the new norm and shutdown their feelings, which will only cause them to act out when reintegration begins.

“There is a myth out there that if children don’t ask questions, leave it alone. That is not necessarily true. Often, they’re holding it because they don’t want to burden you with it. But their understanding of it might be quite skewed, so it’s very important to iron out those wrinkles.”

While children are very good adjusters, the new norm is temporary and the old norm will return and we will have to readjust children back. “In some respects, you don’t want them to become too comfortable with the new norm because of its temporary nature,” adds Noctor, who fears that “resocialisation” of some children will be a problem.

Different children of different ages have different needs but no matter what your particular child is feeling about the circumstances they’re in, “make it clear to them that it is okay to feel that way”, says Prof Sinead McGilloway, founder director of Maynooth University’s Centre for Mental Health and Community Research.

Resilience is very subjective, points out Noctor. Yes, people are dying but it doesn’t mean the difficulties and unhappiness children are facing are any less. You can’t dismiss them with constant reminders of how there are other people worse off.

“When Leaving Cert students give out about an extra two months to wait for their exams and ruining their summer, people eye roll and tell them to get over themselves. But for them, this is two years in the making – they have 17 years’ life experience, this is life or death for them.”

Anxious children will overestimate the challenge and underestimate their own ability. As a parent, he continues, “you are trying to put the challenge in perspective, ‘yes this is a big deal but there are things we can [continue] to do – eg washing our hands, staying away, it is purposeful things we’re doing’ and reassure them they are doing well.”

Parents: How do you think your kids are coping with lockdown?

3. Manage your own anxieties

Psychotherapist and author Stella O’Malley, who in her most recent book, Fragile, looks at why people feel more stressed and how to counter that, believes “anxiety really is a family disease. One anxious person meets a non-anxious person, the anxiety goes nowhere,” she says. “When two anxious people meet, it becomes a party of anxiety – like two alcoholics meeting and saying will we go for a drink.”

That is why it is so important for parents to cope with their own anxieties and not pass them on to children.

“You need the ability to just hang out,” says O’Malley, who lives in Birr, Co Offaly, and has “never seen so many families out walking together – that’s got to be good”.

Do whatever calms you down, whether it is going out for a walk or giving social media or news feeds a break, says Tansey, and “talk to your child when you are calm”.

Parents can be the best source of information for a child and a sounding board for a child who may have access to misinformation from other places, says Anne Tansey, director of the National Educational Psychological Service (NEPS).

“Being the mediator between the headline and a seven-eight-year-old’s brain is really important,” agrees Noctor. Hearing the daily news, children may think older people dying of the virus is inevitable and therefore be fretting about the imminent loss of a loved one that will likely not happen.

More mature offspring can also have a very skewed picture. “The sources of information that teens have access to are questionable at times,” says McGilloway, who recommends family conversations about what they are seeing and understanding.

Even very young children should be involved in arranging a plan for each day, says Tansey. It should include the types of things that make you feel better, including exercise and movement breaks, social activity, such as ringing or skyping a grandparent or friend, and some pursuit such as an art project that can really absorb a child.

“Creative activities are really good for wellbeing – and a bit of school work as well,” she says, stressing that connectivity with schools is a “really important protective factor”.

Sticking to normal meal times and bed times, as well as scheduling activities that children can look forward to, may sound like small things but routine is “absolutely crucial at times like this”, says McGilloway.

When we are stressed, we feel out of control, therefore one way of regaining a sense of control is regular routines and children like that predictability.

“Giving kids and teenagers too much free time can be problematic because that free time can be anxiety time, during which they can ruminate and overthink things,” she adds. “That comes back to the importance of routine and keeping communication lines open.”

Just because we can all retreat to our individual screens and not annoy anybody else in the household doesn’t mean we should – at least, not all the time.

While rules about time spent on devices may have been relaxed – after all they have become vital for remote working, learning and social connection – it is still important to take a break. At meal times for a start, but for other agreed periods – and that applies to parents too. Also be mindful about what the technology is being used for.

“An hour on your phone skyping your grandma and your friends is a good use of an hour,” says Noctor. “An hour on Instagram looking at everyone’s profile and feeling miserable about yourself because they are all getting six hours of home schooling done every day, that is not a good use of your time.”

7. Be truthful about the end game

“How long is this going to last?” It’s what we all want to know. When children ask, don’t fob them off with a “very soon” but explain that nobody knows.

Tansey advocates taking an emphatic approach of acknowledging that continuing this is really hard but the experts are telling us it’s working, along the lines of: “We’re hoping some of the rules will be lifted after May 5th but we have to wait and see what the people who know best say, as they are the ones who will keep us safe. We will get through this – everybody is doing it.”

Read: Could children benefit from the ‘great pause’?

Michael Harding: How I learned to stop worrying and love my enemy
10