After an online backlash Eamonn Holmes has apologised for suggesting that it may “suit the state narrative” to dismiss false claims linking 5G telecoms and coronavirus. Video: ITV/ This Morning 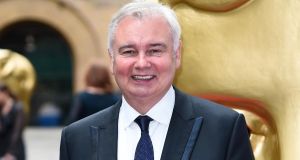 Eamonn Holmes and ITV have been offered ‘guidance’ after comments he made regarding 5G on This Morning. Photograph: Eamonn M McCormack/Getty

Ofcom said it has issued “guidance” to ITV over “ill-judged” comments made by Eamonn Holmes about the discredited theory linking coronavirus with 5G technology.

The media watchdog also imposed a sanction on ESTV over a London Live interview with conspiracy theorist David Icke about the virus.

The organisation is currently prioritising cases involving coronavirus in a bid to stop the spread of misinformation.

A statement from the organisation said the host of ITV’s This Morning “risked undermining viewers’ trust in advice from public authorities and scientific evidence”.

It added: “His statements were also highly sensitive in view of the recent attacks on mobile phone masts in the UK, caused by conspiracy theories linking 5G technology and the virus.”

In a discussion about 5G technology, Holmes told fellow presenter Alice Beer: “I totally agree with everything you are saying but what I don’t accept is mainstream media immediately slapping that down as not true when they don’t know it’s not true.

“No-one should attack or damage or do anything like that but it’s very easy to say it is not true because it suits the state narrative.”

The presenter added: “That’s all I would say, as someone with an inquiring mind.”

The following day, Holmes said on the programme that he would like to “clarify” his comments, adding that there is “no scientific evidence to substantiate any 5G theories”.

However, he did not apologise for the incident and said he had been “misinterpreted”.

Ofcom said it had taken into account his statement, as well as “the prominent caption which rooted the discussion in ‘fake news’” and the context provided by Beer, who “strongly rejected” the theory.

However, it added that guidance had been issued “to ITV and its presenters”.

An Ofcom spokeswoman said: “Broadcasters have editorial freedom to discuss and challenge the approach taken by public authorities to a serious public health crisis such as the coronavirus.

“However, discussions of unproven claims must be put fully into context — especially at a time when mobile phone masts in the UK are being attacked, risking significant harm to the public.”

ESTV “failed in its responsibility to ensure that viewers were adequately protected”, the regulator added.

Ofcom will now consider whether to impose a further sanction and is “directing London Live to broadcast a summary of our findings on a date and form to be decided by Ofcom”.

The theory that 5G is linked to Covid-19 has been widely discredited by experts.

Brendan Wren, professor of microbial pathogenesis at the London School of Hygiene and Tropical Medicine, previously said a connection between the technology and the virus would be “both a physical and biological impossibility”.

ITV and London Live have been contacted for comment.