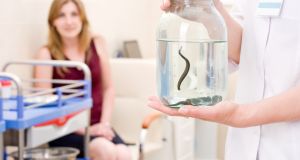 Leeches were initially used to reach places that other bloodletting instruments couldn’t, such as the gums, nose and lips.

One of the striking features of the coronavirus pandemic has been the emergence of some highly questionable “cures”, which have spread rapidly via social media. With the absence of any proven treatment and an effective vaccine against Covid-19 more than 18 months away, it’s understandable that an appetite for anything vaguely curative exists.

It reminds me of the time when medical treatment was based on the belief that there were four bodily “humors”: blood, phlegm, yellow bile and black bile. Disease, it was argued, was the result of an imbalance in these humors; good health was restored by purging, starving, vomiting or blood- letting.

The Greek/ Roman physician Galen (A.D. 129–199) is credited with organizing and promoting the humoral theory of illness. It took discoveries by Andreas Vesalius (1514-1564) and William Harvey (1568-1657) to refute many aspects of the humoral theory.

Galen is often described as the founding father of western medicine. He wrote at least 350 texts which went unchallenged for centuries: they were western medicines standard textbooks right up until the Renaissance. Michael O’Donnell, in his book Medicine’s Strangest Cases, says Galen’s reliance on animal dissections (human dissection was forbidden in Rome) led him to false assumptions about the structure and workings of the human body. “He [Galen] concluded that blood originates in the liver, passes through the heart, where it is mixed with air, then slops around the body. This misinterpretation led him to introduce bloodletting, an occasionally beneficial but often dangerous treatment.”

In the Middle Ages, bloodletting was performed by barbers, which explains the appearance of the traditional barber’s pole. The red is for blood, white represents the tourniquet and the pole is a representation of the stick the patient squeezed to dilate his veins.

A variety of instruments were deployed to puncture veins and draw off the blood; lancets, sometimes spring loaded, fired a blade into the vein; fleams had shafts that folded up like a penknife, each with a different-sized blade; and scarificators were brutal-looking devices containing 12 spring-loaded rotary blades designed to make a number of simultaneous cuts.

Then there were leeches. The word leech is derived from the word loece, to heal. Typically two to four inches long, they were initially used to reach places that other bloodletting instruments couldn’t, such as the gums, nose and lips. Such was their medical popularity, the creatures became an endangered species in Europe.

According to the book Weird Cures, bloodletting fell out of favour in the 19th century. “So did the use of leeches – though they were used occasionally when doctors ran out of other ideas. James Joyce was leeched around one eye in 1922 in a futile effort to halt his advancing blindness. Leeches were also used in a last- ditch effort to keep Joseph Stalin alive in 1953.” However, in this case it turned out that one bloodsucker was unable to help another.

Bloodletting is used now to treat two medical conditions: haemochromatosis, a hereditary condition that causes an overload of iron in the body’s tissues; and polycythaemia, a bone marrow defect that results in an overproduction of red blood cells. In both diseases, regularly scheduled phlebotomy stops any damage being done.

And now the humble leech has made a dramatic comeback. Modern science has discovered that leeches secrete various substances in their saliva, including anti-inflammatory agents, anti-coagulants and a local anaesthetic. The latter ensures that a leech bite is usually painless – a useful attribute for any treatment.

So what are the modern uses for a leech? Mainly in reconstructive microsurgery, where fingers are reattached or ears have been torn off. Venous congestion complicates healing in microsurgery and the leech helps to remove this excess blood.