Chaos (noun): the unique joy of parenting a baby and toddler

Toddler logic means despite explaining a sleeping baby means more play with Mammy, Arthur wants his baby brother to be part of the action 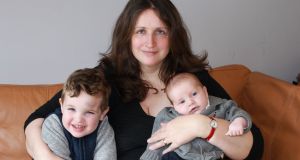 Genevieve, Arthur and Louis Carbery: If I drive for long enough, both will eventually nod off

Two-month-old Louis has taken up a new hobby.

It is pure joy to watch for the 10 minutes Louis’s concentration lasts (ignoring the terror in the back of my head that the tiny Lego pieces are future choking-hazards).

More than that moment, it has given me hope, that the unique joy of parenting a baby and a toddler (best described as never-ending chaos), will soon evolve.

I am banking all my spare sanity on this period of parenting being like a Charlie McCreevy-style SSIA savings account, with no return for a few years and then a major bonanza. Reward will come in the form of time, from the parenting holy grail of “your children entertaining each other”.

So what is this SSIA challenge for parenting both a small toddler and baby? Speed, Synergies, I (or me me me) and Awwww.

If parenting a baby and toddler were a sport in the Winter Olympics, it would combine the luge (the sleighs can reach 140km/h, about the speed needed to keep up with a toddler) with a quadruple jump in figure skating (much like the deftness required to get a baby to nap). However, it is impossible to do them simultaneously, you will ultimately fail at both and end up sore, exhausted and deflated.

There is a complete culture clash between parenting a baby and a toddler. The baby is in his routine of a quiet feed, some gentle wake time followed by delicately formed nap.

The toddler is in his routine of go, go, go.

Baby naps are the biggest challenge. If bringing baby on a walk to nap, the toddler stands on a special buggy step. His happy head soon goes under the pram hood into his brother’s face for a chat (resulting in no sleep).

If trying to get Louis asleep inside, the toddler fun seems to reach a crescendo as the baby flutters his eyelids. Toddler logic means despite explaining a sleeping baby means more play with Mammy, Arthur wants his baby brother to be part of the action.

Number of parenting synergies which currently benefit both of children: Zero – not bedtime, mealtime or housework (unless you count the tripling of washing, meaning I always have enough dirty clothes for a darks and a whites wash).

Even two children in nappies (lucky me) bring no shared benefits. There are two nappy sizes, two types of wipes, and, following a week of toddler upset on baby’s arrival, separate changing tables.

There is one possible synergy – driving. If I drive for long enough (about an hour and a half), both will eventually nod off. Bliss.

No matter how sweet a toddler is (and he really is), it’s simply nature that he and the baby are at their most self-centred ages.

Thus, when the toddler needs help, it is the most important thing in the world. He needs you “now” for a catastrophe – his crayon has fallen on the ground and he wants you to get it (despite explanations that reaching down with baby in a sling will both kill your back and wake the baby). You see, until a few months ago, the level of Mammy service was akin to a Michelin-starred restaurant.

Nowadays, it wouldn’t even qualify for a Bib Gourmand.

Meanwhile, Louis is in his demanding fourth trimester phase, still adjusting to life outside the food-on-tap uterus. But he will never know the Michelin-starred Mammy experience.

Yesterday, I put the two boys in the back of the car. As I cursed at and battled the folding buggy, Louis began crying. Arthur gently reached over and said “it’s okay Louis”.

The crying stopped for a few seconds. And that’s the “Awww” moment of two kids this age, as the fraternal bond begins to form.

Eventually, the toddler will not remember there ever was a Michelin-starred life before his brother, and Mammy and Daddy will dine out on their bounty of brotherly playtime peace (until the fighting starts).

How do I find love as a transgender individual in Ireland?
4

10 great places for a family lunch in Ireland
10