Guests, venues and menus can put a wedge between families before anyone says ‘I do’ 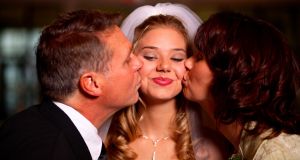 Even the most amenable brides and grooms can find themselves quarrelling with their parents before the wedding day. Photograph: iStock

Wedding planning can stir up conflict between marrying couples and their parents.

Some squabbles are minor. Should the table linens be white or ivory?

But disagreements can turn into a wedge between families.

Insecurity, says Tamar Blank, a psychologist, is largely to blame. “Parents may feel insecure or vulnerable due to the fact that they are ‘losing’ their child,” she says. “They may want to feel more appreciation. Or they may have insecurities of their own that are impacting the way in which they treat their children.

“Similarly,” she adds, “children may experience insecurity as their parents may be paying for the wedding, while the child yearns for more power and control.”

Even the most amenable brides and grooms can find themselves quarrelling with their parents before the wedding day, regardless of who is paying. After all, everyone seems to have an opinion.

How do couples resolve wedding planning disputes with their parents before anyone’s feelings get bruised or relationships get damaged?

Joy and Kevin Davis, both 28 and living in Dublin, had planned to serve Popsicles and Pop-Tarts for dessert during their late-morning wedding, which they were paying for themselves, last May in Austin, Texas.

But Joy’s mother really wanted the couple to have a wedding cake.

“A cake was far from our list of priorities to pay for, but it turned out my mom really cared about it,” says Joy, a public relations consultant. “In the end, I let my mom handle the cake ordering, payment and set-up, and we did have one at our wedding.”

The moral: “Both parties should communicate what’s important to them,” Blank says.

For Mishal and Aaron Majewski, deciding whether to have a religious wedding ceremony was a contentious debate. Aaron (36), a restaurant manager, was raised Christian; Mishal, a 30-year-old auditor, was raised Muslim. Her parents wanted the couple to have a traditional Muslim wedding, but the couple preferred a more secular ceremony.

The couple held two wedding ceremonies. The first one was a traditional Muslim ceremony at the couple’s home in November, 2017, before a small group of family and friends. The couple officially married at a reception the following April. “We had a short and sweet secular ceremony that we were able to customise to us as a couple,” Mishal says.

Another issue was the serving of alcohol, which is forbidden at traditional Muslim weddings. “My family is very traditional, and my mom feared that her conservative Muslim friends would be offended,” Mishal says. “She was also worried about the appearance of inebriated shenanigans in the wedding photos and what our conservative family overseas would say.”

Blank says couples should be mindful of how they frame their conversation with parents. “When you say the word ‘compromise’, often times everyone in the room is turned off,” she says. “So I wouldn’t use that word.”

She recommends couples say something like: “I respect where you’re coming from. Let’s figure out a way to work together so we can both get what we want and we’re both happy.”

When Alanna and Dylan Murray of New York began planning their wedding, the couple’s vision didn’t initially align with what Alanna’s mother had in mind. “My mom wanted a more traditional Long Island wedding at a country club-type place,” says Alanna, 31, who works in public relations. “We knew that was not what we wanted. We were going for something more urban and unique.

“The compromise was that I went to see my mom’s locations and toured probably five spots on Long Island,” she says. “Ultimately, she understood that the Long Island country club scene was not representative of our taste or aesthetic and just not what we wanted.”

With Alanna’s mother on board, the couple wed in September 2014 at Greenpoint Loft, a pre-war warehouse in Brooklyn converted into an events space. Alanna had one quibble with the venue. “My mom was absolutely horrified when she had to take a freight elevator up to the fourth floor,” Alanna says.

“She won’t admit it, but I’m pretty sure she sent a painter to the building the day before the wedding to actually paint over the graffiti in the freight elevator. The building owner asked us if we knew anything about it and we just played dumb.”

Many couples, including the Murrays, disagree with their parents over how many guests should be invited. Both sets of parents, Alanna says, “wanted to invite tons of extended family we had never even met”.

“My mother-in-law actually had the name of a relative on her version of the guest list who we later found out had passed away,” she says. “That’s how distant she was getting.”

To solve the issue, Alanna’s husband got help. “He enlisted his sister and his dad to help convince his mom that the extended family members would not be insulted if they were not invited,” she says.

“It also helped to break down the cost per person and show how much all the extra people would be. We had a set budget and would have had to sacrifice other things, like having a live band, to accommodate more guests.”

Ultimately, the couple’s invitation list was trimmed to about 130 from 160, and roughly 120 guests attended the wedding.

No distant relatives were invited. – The New York Times