Learning the ropes: why skipping is the ultimate workout

No longer seen as just a schoolgirl game, fitness aficionados, and that includes men, are discovering the health benefits of the sport 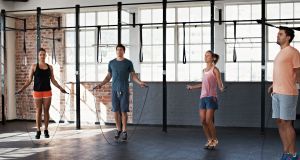 Want to get fit and burn serious calories, but don’t have the time to work out? You need to take up skipping; favoured exercise of celebrities from Kate Hudson to Justin Bieber.

However, although skipping looks easy, for the uninitiated it can be surprisingly difficult and Irish men, in particular, are often far from competent skippers.

Eight years ago, Mark McCabe, who lives in Dundalk, went to the UK to become a qualified skipping instructor and set up skipnrope.com to teach basic to really elaborate skipping, depending on the need.

A lover of all sports, McCabe, who’s also a Cúl Camp instructor, quickly became intrigued by the health and coordination benefits of skipping. Starting off running kids’ workshops in schools (something he still does), he branched into helping adults, especially men who start CrossFit classes and who need extra help, particularly with tricky double unders.

“I think boys do sometimes find skipping more difficult. I see it even when I go to schools, boys try to skip too fast, they want to be good immediately and if they can’t get it perfectly straightaway, they get frustrated and are inclined to give up.”

There are exceptions, of course – young boxers, martial arts enthusiasts, Irish dancers who dance for fitness and footwork and interestingly, according to McCabe, children from eastern European backgrounds who sometimes have more of a grounding in skipping. In Ireland, there’s traditionally been more of a gender divide (girls have more a skipping tradition) but that’s changing as fitness and conditioning benefits for everyone become apparent.

“Skipping improves your jump height, develops your calf muscles and improves footwork and hand-eye coordination – it’s a total body workout. Unfortunately, people sometimes get the wrong instruction; they might be told when you hear the rope hit the ground you jump, that’s wrong. Or sometimes people double-bounce and can’t get out of the habit. I’ve been trained to break technique down bit by bit. Everybody can learn to skip no matter your age,” McCabe insists.

Owner of CrossFit Meath, Niall Matthews agrees when it comes to skipping, Irish men sometimes need a helping hand. “A lot of men really struggle, particularly older Irish men who might have stayed away from it at school. Overall, we find younger men are more likely to have experienced skipping through boxing or martial arts or some other crossover activity but older men, especially if they can’t get it quickly, they often get embarrassed and ask for an alternative activity – but skipping is one of the basics of CrossFit. I always tell them, it’s like riding a bike, once you get it you’ll have it for life but it can take a bit of practice.”

CrossFit Meath, based in Ashbourne, opened a second facility, CrossFit Navan just this August and Matthews has decided to bring in Mark McCabe to give skipping demonstrations to new clients.

“I think it’ll be good for everyone but especially the guys to see a man who can skip so well and who can break down the moves so they can learn faster. To be honest, even I wasn’t able to skip much when I took up CrossFit seven years ago – I didn’t do skipping in school and it took quite a bit of time and practice to become competent, so any tips that help you learn more efficiently from the beginning is an advantage,” says Matthews.

Brand manager Ian O’Rourke, from Meath, was himself coached by Mark McCabe when he and some others were training for a white-collar boxing match. The 29-year-old says he’s since incorporated skipping into his different training sessions.

“I went to a mixed primary school but the boys never skipped. I couldn’t skip at all but it’s a vital part of boxing and I was training four times a week and needed to do 20-minute skips at a time and it was hard not to mess up. Mark gave helpful tips and pointers – things like not using up too much energy, keeping your hands close to your body – he could see what everybody was doing wrong,” he says.

“I’m considerably better at skipping now. When I go to the gym it’s actually my preferred warm-up – I don’t like treadmills. I play Gaelic football and skipping has been really good for my footwork and hand-eye coordination – it definitely helps you jump better; jumping and landing is so important in football. More young fellas are skipping now and not thinking twice. The great thing about having a rope is you can bring it anywhere and get a really good workout in a short space of time.”

I'm up for sex the whole time, but my husband sees it as not putting in any effort
2