Fighting arts: Tell me about . . . Karate

No weapons but ‘empty hand’ delivers many benefits to members 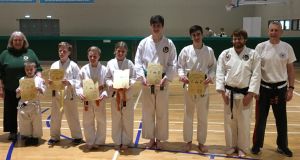 Lynne Loftus first took an interest in karate when she took her daughter along to a class with a friend. Now she is training and teaching the art in Greystones, Co Wicklow.

Where does karate originate?

It started out in an island called Okinawa in Japan. History suggests it originated in other parts of Japan and China even centuries before that but officially it began in Okinawa. It was only in the beginning of the last century, the early 1900s really, when it started to take hold and become popular in Europe and North America.

It is enormously popular. There are a hundred million practitioners on five continents in nearly 200 countries. It’s unifying, because we train in Japanese you can go anywhere, any karate dojo, even if it’s a different style you’ll be able to join in and do the syllabus. It’s mostly done through Japanese, they will call it in English too, but once you have done your first few belts then your are understanding what the Japanese is to the movement. One reason for it being so popular is it can be trained anywhere.

What is the main focus of karate?

Obviously it started out as self-defence. The meaning of karate is empty hand, so no weapon, and our Wado-ryu [style of karate] is ‘the way of peace’. The whole focus of the training is a balance of mind and body so you are not just training the body to do certain movements you are using control and self-discipline and a balance on how you relax your mind.

You never attack first, verbally or physically. This is self-defence. Something we learn and teach early on is if someone does attack you, you run but if you need to defend yourself then you have the skills in order to defend not attack.

Developing your mind and body really stands to you in other situations, in other facets in life.

We would utilise both the upper and lower body. The very first moves that we learn would be the punch, it’s a straight punch and then a kick, or a roundhouse kick. To say one move is difficult but as I said we would be utilising the whole body. It’s full body movements that we do in order to get the most out of a punch or a kick.

You get your first suit and it comes with a white belt and from there then, no matter what age you are, quite quickly you will learn the basic syllabus and you will get your yellow belt. You’ll perform that syllabus in front of the sensei’s – the instructors. It’s yellow belt, orange, green, blue, purple and then you get your brown and there are three browns. The lower grades are called kyu and go up to 8th kyu and then you get your black belt and that is 1st Dan, Dan grades follow from there.

How would I find a club or organisation in Ireland?

There is the national governing body which is ONAKAI it’s the Official National Amateur Karate Association of Ireland and they are aligned to the World Karate Federation, and finally in 2020 karate is going to be in the Olympics in Tokyo. You can go on their website and you can click on a county and it will tell you where there are clubs in that county. The national wadokai association that we have just joined it is IWKA – the Ireland Wadokai Karate Association.

I think personally, and anyone who has trained in the art would realise quite early on, that it benefits the person as a whole and how you progress due to the fitness. Karate got me fit.

You do it slowly you, do it at your own pace. The training creates a great focus and what we found across the board is that, certainly for young people, it will create a sense of discipline, respect, self-control, fitness, flexibility and conditioning.

Statistics prove that there are more serious injuries in team sports than there are in karate and I think the reason for that is right from class one you are taught control. We do have a punch to the head but its so controlled that you tap, you have to tap, it’s not a punch so it’s very safe. We would have very few injuries, if we did it might be a strain or a sprain.