Diet bereft of fruit and veg has far-reaching consequences

Arfid is a recent diagnostic category – more than just picky eating. Is your family at risk? 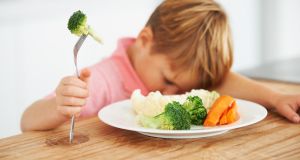 Where energy intake is impaired by the pattern of eating, the child may have such a lack of energy they cannot get through the day without a nap. File photograph: Getty

A diet of French fries, Pringle crisps and processed ham sounds Utopian for children and teenagers going through a “fussy” eating phase. As parents will be aware, many children develop a hate relationship with fruit and vegetables. This inter-generational bone of contention usually settles over time.

But when it doesn’t, as in the case of a teenage boy from Bristol, the consequences can be serious. According to a case report published this week in the Annals of Internal Medicine, he went blind after several years of a diet completely lacking in fruit and vegetables.

Initially presenting to his doctor with tiredness, he was found to have anaemia with low levels of vitamin B12 in his system. He was given B12 injections and dietary advice; a year later, having ignored medical advice, he developed hearing loss and impaired vision. By the time he was 17, his vision had worsened to the point of blindness.

Cases like this are uncommon, but parents should be aware of the potential harm that can be caused by picky eating and seek expert help

Investigations at this stage found vitamin B12 and vitamin D deficiencies, a reduced bone mineral density, low levels of copper and selenium, and a high zinc level.

“The patient confessed that since elementary school, he had avoided foods with certain textures and only ate French fries, Pringles, white bread, processed ham slices, and sausage,” the authors of the report said.”By the time his condition was diagnosed, the patient had permanently impaired vision.”

Although rarely seen in the developed world, poor nutrition can damage the nervous system. In this case the nerve fibres in the boy’s optic nerves died because they were starved of essential vitamins (nutritional optic neuropathy). He now has blind spots in the middle of his vision, which makes it difficult to read or watch TV. He can walk unaided, however, as he still has some peripheral vision.

The case is quite shocking in an era where we associate problem eating with overweight and obese children. This teenager was neither under or overweight but such was his state of malnutrition that in addition to the visual loss he had lost minerals from his bone – the result of the body urgently scavenging for a source of minerals needed elsewhere in his system.

Lead author of the report, Dr Denize Atan, said cases like this are uncommon, but that parents should be aware of the potential harm that can be caused by picky eating and seek expert help.

The Bristol teenager was diagnosed with avoidant-restrictive food intake disorder (Arfid). He was treated with vitamin supplements and referred to a specialist mental-health team.

More than just picky eating, Arfid is a relatively recent diagnostic category. Introduced in 2013 when it first appeared in the fifth edition of the Diagnostic and Statistical Manual of Mental Disorders (DSM-5), it was previously known as Selective Eating Disorder.

Arfid is characterised by a pattern of eating that avoids certain foods entirely or the amount of the food the person consumes is restricted. The diagnosis does not apply if the restricted eating is due to lack of available food, or because of cultural norms (someone who is fasting or chooses not to eat certain foods for religious or cultural reasons).

Arfid is different from other restrictive eating disorders: it isn’t affected by a person’s beliefs about the size and shape of their body; someone with Arfid doesn’t restrict their food intake for the specific purpose of losing weight; and Arfid doesn’t feature some of the other behaviours that can be associated with anorexia or bulimia, such as overexercising.

Could your child have Arfid? Here’s what to look out for:

Where energy intake is impaired by the pattern of eating, the child may have such a lack of energy they cannot get through the day without a nap. Children on the autism spectrum, and those with attention-deficit hyperactivity disorder and intellectual disability are more likely to develop Arfid. But it can occur at any age and is not just a label for a fussy eater.

My 21-year-old daughter doesn’t seem to have any friends. Would therapy help?
8