My 16-year-old has become obsessed with make-up 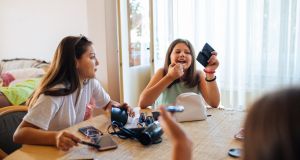 Her friends do seem to wear a lot of make-up, but my daughter seems to wear the most. Photograph: iStock

Question:
About a year ago, my then 15-year-old daughter started to wear make-up. As her dad, I didn’t pay much attention to this, though I never really approve of young teenagers wearing make-up.

Now at 16, she has become obsessed with make-up and will not leave the house without having some on. I’m not talking about a light bit of lipstick – she has started to really put loads on. I think it does nothing for her and I have told her so but she ignores me. Her mum doesn’t like it either, but is less concerned about it than me. She says it is just fashion and tries not to make a big deal about it.

As her dad, I should probably stay out of it. But it does bother me that she feels she has to change how she looks so much just to fit in. As a group, her friends do seem to wear a lot of make-up, but my daughter seems to wear the most. I’m worried about how insecure she must be to feel she has to do this.

Is she that insecure about how she looks?

Am I over-reacting and should I just back off and say nothing?

Answer:
As children become teenagers and start developing their own independent dress sense and fashion, this frequently leads to conflict with parents. Whether this is short skirts or make-up, It is normal for parents to feel uncomfortable as teens experiment with their appearance. Much of this discomfort stems from the fact that their children are now becoming sexual beings, exploring their sexual identity and trying to be attractive to peers and potential boyfriends and girlfriends. Though this is of course a normal transition, it can bring with it new vulnerabilities and insecurities as teenagers experience peer pressure to fit in. You are right to be concerned about whether your daughter’s interest in make-up is driven by her confidence of expression or an insecurity about her body image (or indeed it could be a bit of both.)

Different parents can respond differently to their daughters changing fashion interests. Some become critical and some become more supportive allies as they help their teenagers choose and work out the image they want for themselves. Fathers and mothers tend to respond differently (though not always), with many fathers deferring these conversations to the mothers, who might have gone through the same issues as young women themselves.

I think it is helpful for teenagers to have at least one parent involved with them as they make choices about what clothes to wear or what make-up is best. Having a concerned adult opinion outside their peer group can be an important counterbalance to teenage pressures and insecurities. Going well, such an involvement (which invariably includes lots of shopping trips) can be a source of connection between parent and child. It is more usual for a mother to take on this particular role, though as a father you also have a key role in promoting a positive body image.

Giving your daughter an important message

While helping her choose the specifics of her clothing or make-up is unlikely to be your forte as her father, it is important that you continue to communicate a message of how much you love her and think she is beautiful, whatever her appearance. However, be careful that this message does not come inadvertently across as a criticism of her. For example, if you were to say that she has too much make-up on, she might take this to heart, as a criticism of her appearance. Instead it is important to first and foremost give the positive message that you think she is beautiful whether she wears make-up at all, and also still find ways of complimenting her appearance and her fashion choices.

To counteract their insecurities, teenagers need lots of positive encouragement from their parents. Try to praise the specific things you do like about her fashion choices. If she does experiment with lighter make-up, you could praise this – “I think your lipstick looks lovely today, it shows off your natural beauty”. Also, give her lots of encouragement and praise about other aspects of her life, such as her opinions, her work in school, her interest in sport or activities and so on. Take the emphasis off appearance and build her self-esteem in lots of different ways.

Help her think about peer pressure regarding appearance

If you think insecurity might underpin some of her make-up choices, you can help her think this through by opening a conversation with her. It is best to use a listening rather than a giving-one’s-opinion approach. Look for opportunities when you can raise the subject of fashion and proceed with gentle questions. For example, when something comes up on the TV, you could ask her about what styles are fashionable now. Or what fashion does she like herself? As the conversation progresses you could ask does she think girls are under pressure to look a certain way? How does that pressure affect them? And what can be done to help them? Such conversations give you an opportunity to reinforce positive messages about her body image and self-esteem.

John Sharry is founder of the Parents Plus Charity and an adjunct professor at the UCD School of Psychology. He is author of several parenting books, including ‘Bringing up happy confident children’. See solutiontalk.ie